A Plus tears Abena Korkor into shreds in latest post 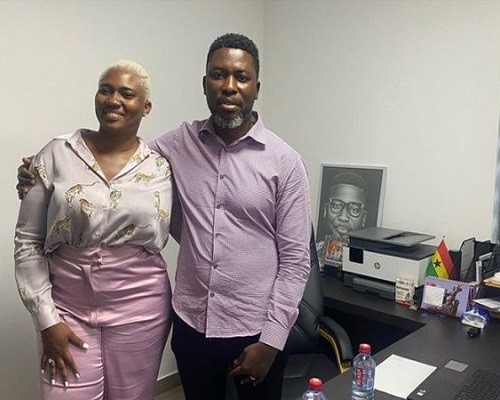 Abena Korkor and A Plus

Social Commentator, Kwame A Plus, has in recent times earned the title ‘Abena Korkor’s slayer’, and this perhaps is due to the fact that he happens to be one of the few who is able to successfully scold and silence the socialite when she misbehaves on social media.

Kwame A Plus, whose toes have been trampled on again, has been compelled to tackle the socialite in a more severe manner as compared to the previous instances.

A Plus’ attacks at Korkor were necessitated by her recent social media rants in which he and the likes of Nana Aba Anamoah, Serwaa Amihere, and others were dragged in.

Together with these celebrities, A Plus was dragged by Abena Korkor once again and he has seized the opportunity to put an end to what he describes as a ‘nonsensical’ trend.

In a long post on social media, addressed to Korkor, A Plus poured out all his sentiment.

“Abena Korkor you no craze pass anybody. You remember that guy you lied to that you had misplaced your house key so he should get you a place to spend the night and he took you to Marriott Hotel? That was the very first day you saw him. Abi he go diet your distin? Why haven't you mentioned his name? Didn't you blackmail him to buy you 3 air-conditions? Wo de do tw* ayɛ fix deposit na wo didi ho. Wasua adwuma pa. Kɔso aaa na kɔso, Onyame ba.

"You are not just a frustrated @sh@wo ooo. You are a confidence trickster and a blackmailer, aka ajana 1 ajana 2. Look at you calling people corporate ashawo. Yeah, at least they have added some class to it. You diɛɛ @sh@wo kobokobo. @sh@wo yatete so ooo!! @sh@wo Maame abɔ ka ooo obia mbedi bi. @sh@wo buy one get 10 free. The number of k)ti that has has entered that your loooong distin like KFC drive through if we join them together it will be longer than all the roads Akufo Addo has built in 5 years.

"You called me on 7th March, to apologize. True or false? I was happy when you said during the call that you insulted me because the video, I unleashed on you really hurt you. I felt so good hearing that I hurt you. I thought you said you don't care? Ei so after all that you do to others you also get hurt? You? Bɔdamfo a wa yɛ hurt. Bɔdamfo wɔyɛ emotional. Monwhɛ asɛm ooo. Mmɔle!! Do you know Mmɔle? You thought I was going to get back to you and say come for money. Anka I'll use that money to clean my hairy *ss and flash it. Gyimiii. Madam, wafrɛ dance abɔka. Ayɛ wo ka ayoooh Adwuma no ayɛwo ka ayooooh. Me if you post 1000 I'll take my time to decide when to give and when not to give a demn. If I don't mind you don't think you have won ooo. Your big nose like extra time. #halfmanhalfbosom,” he wrote.

The post which was shared on Kwame A Plus’ Instagram wall has since attracted responses from scores of Ghanaian celebrities.

Most of them have seconded his seemingly ‘harsh post,’ adding that Abena Korkor deserves to be fed the same dose of her medicine.

This is the third time A Plus has tackled Abena Korkor on social media over her misconduct, which includes purporting malicious claims against notable celebrities.

In all instances, Abena Korkor after being disciplined by A Plus, has rendered apologies for her misconduct.

Most recent of all her apologies was when she remorsefully pleaded for forgiveness from A Plus, Nana Aba Anamoah and Serwaa Amihere during a live edition of UTV’s United Showbiz.


A post shared by The People's Person 🇬🇭 (@kwameaplus)