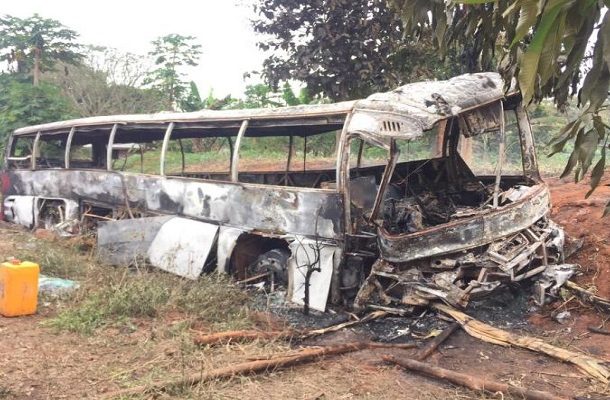 The Offinso Circuit Court in the Ashanti Region has for the second time remanded into police custody, the bus driver who is accused of causing an accident at Akumadan, in which six persons were burnt to death on Tuesday, November 2, 2021.

Akwasi Amoateng is expected to reappear before the court presided over by H/H Frederick Kwabena Twumasi on December 6, 2021.

The driver absconded shortly after the incident, but he subsequently turned himself in and was detained.

According to the prosecutors, their preliminary investigations show that the suspect ignored warning signs from passengers and the police at a checkpoint, before the accident occurred.

He has thus been provisionally charged with careless and inconsiderate driving and negligently causing harm.

The police said the driver was on top speed as he approached a police checkpoint in Akumadan, the district capital of the Offinso North District.

Due to the speed, he could not avoid a head-on collision with a stationary Kia Rhino Truck parked at the Police checkpoint.

The Yutong Bus he was driving then caught fire after the collision, leading to six people being burned beyond recognition while 22 others sustained varying degrees of injury.