A/R: Police hunt for woman who dumped baby in gutter 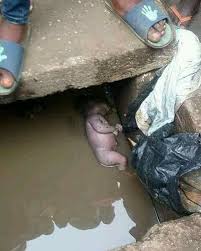 Local authorities at Ayigya Ahenebronum Electoral Area at Kumasi in the Ashanti Region, are searching for a woman allegedly responsible for dumping a five-month old baby into a gutter at the Ayigya Market.

He said opinion leaders in the area have also begun investigations to identify the perpetrator of the crime.

He indicated that local authorities will continue to educate teenagers in the area to abstain from such acts and remain chaste.

Meanwhile, Police say they will continue with investigations to get the suspect arrested.