A tense calm in Guinea as trouble is on the horizon 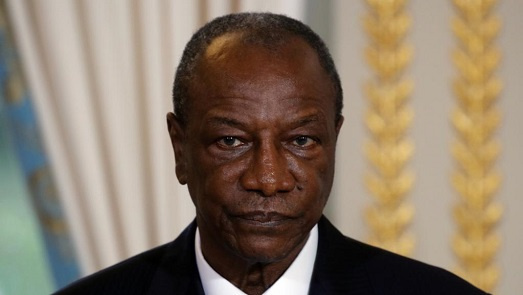 Guinea’s President Alpha Conde was prepared to risk it all and seek a controversial third term.

Over the past year, the 82-year-old defied massive protests to push through a new constitution in a March referendum that critics denounced as a plot to sidestep a two-term limit on presidential mandates.

As tensions rose in the lead-up to the October 18 polls, he shut Guinea’s borders and severely restricted internet and phone lines.

Days after the vote, Tanzania’s electoral commission declared Conde the winner with 59 percent of the vote against the main opposition leader, Cellou Dalein Diallo, with just over 33 percent.

The result requires confirmation by the Constitutional Court, but its announcement sparked deadly unrest.

More than 20 people were killed as Diallo’s supporters clashed with security forces, according to the government, while the opposition puts the number of fatalities closer to 30. Amnesty International, a global human rights watchdog, said videos and witness testimonies showed security forces using live ammunition against opposition supporters.

Diallo, a former prime minister who lost to Conde in two previous elections, was blamed for escalating tensions by claiming an early victory based on the results at the polling stations.

A spokesman from Diallo’s party said it has proof of fraud and will contest the result in the courts. The absence of major international election observers means their efforts will likely be futile.

When Conde came to power in 2010, in the country’s first democratic elections since independence from France in 1958, he was seen as a new start for the West African country.

The newly elected president compared himself to South Africa’s Nelson Mandela, ushering in change after decades of authoritarian rule.

But while Mandela famously stepped down after only one presidential term, Conde, a former law professor, had other plans.

He first revealed his wish to change the constitution to extend his rule in a meeting with Russia’s President Vladimir Putin in the Black Sea resort of Sochi a year before the vote.

Putin, who recently changed the Russian constitution allowing him to run again for the presidency in 2024 – and potentially stay in power until 2036, backed Conde through then-Ambassador Alexander Bregadze who said, “constitutions are no dogma, Bible or Koran”, and that “as the popular Russian saying goes, you don’t change horses at a river crossing”.

Analysts say Russia has a clear interest that Conde remains in power through aluminium producer United Co Rusal, which sources about a third of its bauxite – the main ingredient in aluminium – from Guinean mines.

Conde’s re-election will give investors some “peace of mind”, even if allegations of electoral fraud and violence against civilians by security forces will seriously worry investors, Verisk Maplecroft’s Africa analyst, Eric Humphery-Smith, said in an emailed comment.

So far, most of the violence has been concentrated in the capital, Conakry, but this could change as the opposition continues to contest election results.

For Simandou partners, Conde’s victory is the “green light” they needed to move ahead, Humphery-Smith said.

The country is likely to remain unstable in the weeks to come. Conde is under pressure from both the opposition contesting the vote and the National Front for the Defense of the Constitution – a coalition of political opposition parties and civil society groups opposing his third term.

While Diallo agreed to meet with a joint ECOWAS, African Union and United Nations mediation mission, members of the pre-election movement calling for Conde to abandon his third-term bid refused to meet with the mediators showing they remain in protest mood.

It is too soon to say whether they will be able to rally the tens of thousands that took to the streets before the March referendum.

France, the former colonial power, is likely more concerned about events in neighbouring Ivory Coast where President Alassane Ouattara also has his eyes set on a third term.

US Assistant Secretary for African Affairs Tibor Nagy, who early on asked Conde to reconsider any plans to seek a third term, settled on calling for all actors to respect the outcome of the vote.

Meanwhile, clashes between opposition supporters and security forces have continued in Conakry, the mining belt and the town of Kindia where mutinous soldiers rattled their guns in the days before the vote.

Internet remains restricted and French telecom operator Orange says its international lines are down, further isolating protesters in Conakry from the outside world.

Despite Conde’s calls for calm while promising to “remain open to dialogue and available to work with all Guineans” during his third term, Guineans are bracing for a period of political turbulence, instability and more violence.