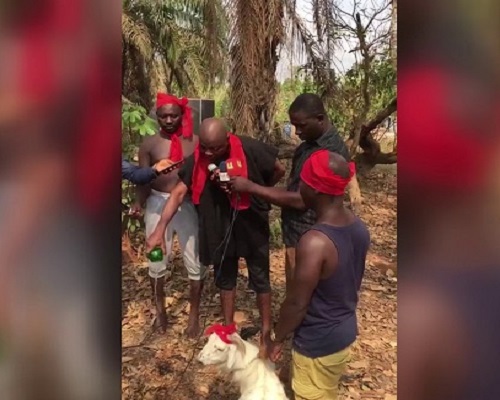 Abronye invoked curses on Yayra Koku saying he lied about him

The Bono Regional Chairman of the New Patriotic Party, Kwame Baffoe a.k.a Abronye DC has been given a 72-hour ultimatum to reverse a curse he invoked on National Democratic Congress member, Yayra Koku or risk the deadly wrath of several Volta gods.

The Deku family which Yayra Koku belongs to, in a press communiqué dated February 12, 2020, explains that per their investigations, they have confirmed the innocence of their son.

They added that Yayra Koku never alleged that Abronye has been given 5 of the missing 500 excavators seized by the government.

“We are therefore giving Abronye D.C 72hrs ultimatum to reverse the curse through the same medium and render an unqualified apology to Yayra Koku and the entire Deku family or face the wrath of Torgui Zakadza of Nogokpo, Torgbui Hogbatso of Atiavi, Torgbui Ga of Klikor and Torgbui Ga of Avenorfeme,” part of the statement reads.