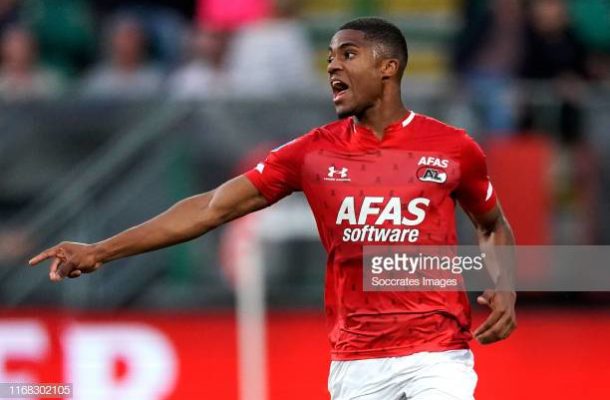 Sleeping Italian giants, AC Milan were interested in Ghana youngster Myron Boadu from AZ Alkmaar but have sets their sights on a relatively cheaper option.

The Dutch born Ghanaian striker has been a revelation this season in the Dutch league with his superb form .

Leading clubs from around Europe like AC Milan, Everton, Barcelona, Bayer Leverkusen and Newcastle have all been linked to the prolific marksman.

Boadu's club have quoted the Italian side 40 million euros which is way outside their budget and have therefore identified 19-year-old Marcos Paulo from Fluminense.

The young striker has been on the radar of various big European clubs, including FC Barcelona and Real Madrid.

According to Tuttosport, Milan are readying an offer for the Brazilian born Portuguese which could be around €13m to €15m.

The Italian giants are keen on rejuvenating their squad this summer, with several young forwards being linked to the club.

AZ starlet Myron Boadu has been tipped as their top target, but the Dutch club is not prepared to let the Dutch international leave for anything below €40m.

Milan have turned their attention to Paulo, who has made 36 appearances for Fluminense, scoring eight goals and providing six assists.

The young striker is an international for Portugal, playing for both the U19 and U21 teams.

It is believed the young striker is keen on moving to Europe and the Serie A could be an ideal destination.