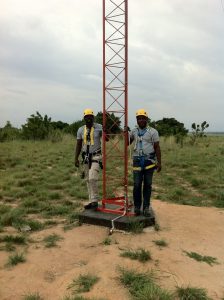 "The Grantee invites submission of qualifications and proposal data (collectively referred to as the "Proposal") from interested U.S. firms that are qualified on the basis of experience and capability to provide technical assistance to assist eleQtra (West Africa) Limited ("eleQtra") in advancing the Greater Accra 50 megawatt wind power project ("Project") to financing and implementation." the statement reads.

The project which is being constructed under an Engineering, procurement and construction (EPC) contract will add much needed electricity generation capacity to the national grid of Ghana, reducing reliance on hydropower generation and resulting exposure to rainfall patterns while avoiding increased carbon emissions from oil, gas or coal fired generation.

Ghana's grid has suffered from substantial generation deficits due to a combination of accelerating growth in demand, long term under investment in new generation assets and low rainfall in the Volta River catchment. In response to these challenges the Government has set a target to increase installed capacity from under 3,000MW to 5,000MW by 2020. In addition Government has enacted a Renewable Energy Law and set a target for 10% of generation capacity to come from new renewables sources including wind, solar, small and medium hydro and other sources. A feed-in-tariff regime was established in 2013 establishing tariffs for wind, solar, small and medium hydro and other sources.

EleQtra commenced gathering wind data in 2010 and in 2014 selected a preferred site for the development of a 50MW wind project (expendable to over 100MW at subsequent phases) and obtained a Provisional Generation License from the Energy Commission.

In 2015 eleQtra installed a 120m high meteorological mast on site and initialled a draft PPA with the Electricity Company of Ghana for the sale of energy from the Project. Presently we are competing land acquisition of the project site and undertaking environmental and technical studies.

The Project is being developed as a privately owned independent power producer ("IPP") under a Build Own Operate structure whereby power will be sold to ECG under a 20 year PPA.

EleQtra  aims to close financing of the project and commence construction in 2017 with operations commencing in 2018.