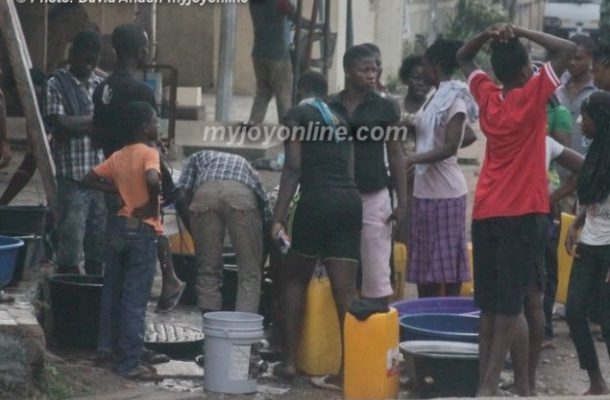 Residents of Old Tafo in Kumasi in the Ashanti Region will have to brace themselves up to pay more for water as long as the commodity remains in short supply.

The area has been hit by an acute water crisis for over two weeks.

The situation has brought pressure on the few wells in the area and is getting worse by the day.

Correspondent Mahmud Mohammed Nurudeen who visited the community reports private water suppliers are cashing in on the situation.

Nurudeen visited one of the water supplies in the Old Tafo Municipality and reports the situation is chaotic.

“Long queues, amid hot verbal exchanges among desperate persons looking for the essential commodity, are what I found,” he described.

The residents say they are suffering. The water sellers in the neighborhood have not been left out of the search for water.

One of them, Lydia Osei told Nurudeen, they have had to resort to the use of sachet water and water from wells for cooking and bathing.

Water tanker services have also taken advantage of the situation and are cashing in. Some of them are now charging as high as 300.00 cedis twice more than the original price.

Students say they are unable to attend school because of the long queues they have to join.

It is not clear what has caused the shortage. Several attempts by Nurudeen to contact the Water Company proved futile.