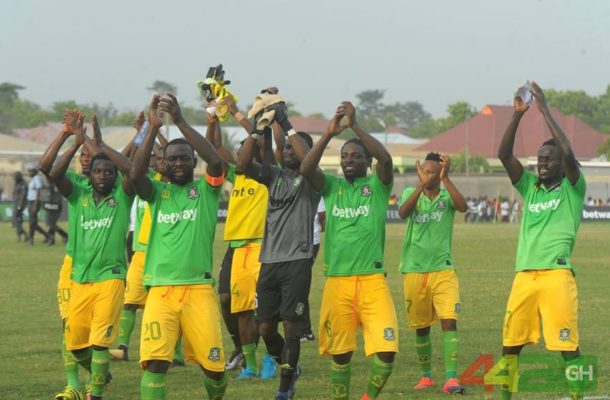 Aduana Stars advanced to the CAF Confederation Cup group stage for the first time in their history despite suffering a 2-1 at Fosa Juniors of Madagascar in the second leg of the playoffs on Wednesday.

The defending Premier League champions progressed on a 7-3 aggregate victory thanks to their emphatic 6-1 first-leg victory over the Southern African side.

Fosa Juniors took an early lead from the penalty spot at the Stade Rademananjara. They added another goal to make it 2-0 ten minutes into the second half.

Nathaniel Asamoah halved the deficit for Aduana Stars in the 68th minute.

Goalkeeper Joseph Addo denied the home team from the spot late in the game to keep the score at 2-1.

Aduana thus become the first team from Ghana to make the group stage of an African club competition since Medeama in 2016.

They join AS Vita Club, Al Masry, USM Alger and ASEC Mimosas to make the group stages of this year's Confederation Cup.

The group stage draw is slated for 21st April 2018 at Cairo.