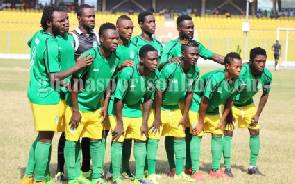 The Dormaa-based suffered a “controversial” defeat to the Wa outfit in which they emerge as the Champions of the 2015-16 Premier League season.

Appiah Kubi believes Referee Ali Alhasan, frustrated his side and denied them a victory to clinch the Premier League.

In relations to this he further stressed the President of the Ghana Football Association, Kwesi Nyantakyi, who owns Wa All Stars was influential in the Referees decision to cheat Aduana Stars.

“The referee awarded a dubious penalty and cheated us throughout the game for Wa All Stars to win the game," he told Kingdom FM.

“The fans of Wa All Stars attacked me and my CEO Albert Commey physically.Mr Commey was just discharge from the hospital we were all beaten drastically and physically assaulted, it was sad for day for Ghana football.

“From what I saw yesterday, Kwesi Nyantakyi is incompetent as the GFA boss and he needs to resign immediately, ‘’he added