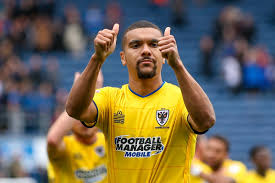 Despite the club’s decent start to the new campaign, the Ghanaian international is yet to manage a single goal so far.

The Dons got their season off with a win last week when they beat Fleetwood Town 1-0 and followed it up with a creditable 0-0 draw with Coventry City.

Appiah who did not score in either games remains upbeat of getting his name on the scoresheets sooner rather than later.

He said: “I believe in my ability to score goals. I’ve hit the post and had a good few chances, but it will come and I’m not worried about that. We will keep digging in and putting in good performances. I think we deserved more (against Coventry). We were a bit unlucky, some of our chances did not quite fall the way we needed them to. It was a point, a clean sheet, so we can build on that, and move forward. I’ve been informed that we’ve not done too well in the first round of the Carabao Cup, so hopefully we can put that right on Tuesday and get a victory.