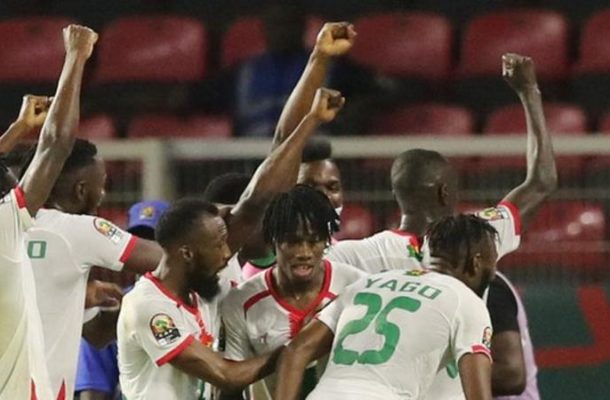 Burkina Faso muscled their way to an important 1-0 victory over Cape Verde in Thursday's second Group A game at the Africa Cup of Nations in Cameroon.

After an opening defeat by the hosts, this was a must-win for the Stallions, who claimed a narrow victory thanks to Hassane Bande's 40th-minute goal.

Cameroon lead the group after beating Ethiopia, while Burkina Faso and Cape Verde stand level on three points each.

The Burkinabe were without Bertrand Traore after his positive Covid test.

While the Aston Villa forward was absent in Yaounde, coach Kamou Malo led the team for the first time after returning from his own Covid case.

In the opening half hour, the Stallions - who were the stronger team throughout - called Cape Verde keeper Vozinha into action a number of times.

The veteran 35-year-old, back in the team after also recovering from Covid, made a smart save from Edmond Tapsoba's low free-kick in the 12th minute.

Ten minutes later, he stood his ground well as Bande, in the Burkina side to replace Traore, failed to finish off Tapsoba's fine run from deep.

Shortly before half-time, Bande finally got the better of Vozinha, chesting home Isa Kabore's fine cross to give the Burkinabe the lead.

Cape Verde's best chance came around the half-hour mark, when Julio Tavares forced Herve Koffi into action for the first time, but the Burkinabe keeper tipped the shot round the post when a firmer strike may have beaten him.

In the second half, the Blue Sharks tried to be more positive - with Garry Rodrigues, Julio Tavares and captain Stopira all having opportunities.

Yet they were unable to convert them and coach Bubista, still missing because of yet another Covid infection, will have been a frustrated viewer as his team failed to capitalise on their opening win against Ethiopia.

Burkina Faso's improved performance gives them every chance of claiming a spot in the last 16, and victory against pointless Ethiopia on Monday will see them finish second in the group should Cape Verde fail to beat Cameroon.

Cameroon lead the group with two wins from two, and have qualified for the next round already as one of the best third-placed runners-up at the very least.