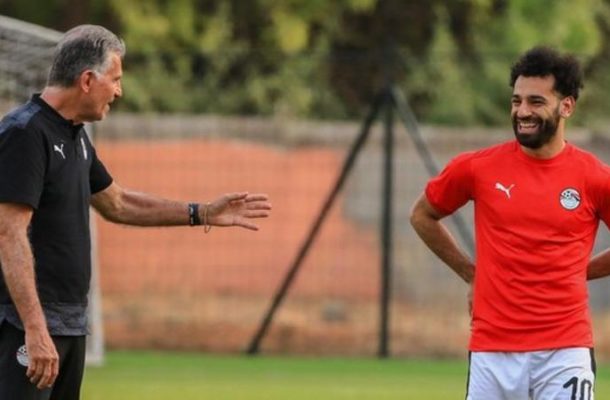 Egypt have one the world's leading strikers in Liverpool's Mohamed Salah, yet the Pharaohs scored just twice in their three Group D matches at the Africa Cup of Nations to reach the last 16.

It is a fact not lost on their Mozambique-born Portuguese coach Carlos Queiroz.

"Look I promise you starting from tomorrow they are going to be doing finishing exercises from the morning until the afternoon," he quipped to BBC Sport Africa after their 1-0 win over Sudan on Wednesday.

"Despite all the pressure they come back (from losing to Nigeria in their opening game). They play strong, they play good football.

"They just need to score more goals. To only play good football is not enough - we need to build up more goals and with that be more relaxed in the game."

Salah scored the winner against Guinea-Bissau in the Pharaohs' second game at the Nations Cup and had chances to add to his tally against Sudan, but it was defender Mohamed Abdelmonem who scored the only goal to secure Egypt's place in the knock-out stages.

Former South Africa, Real Madrid, Portugal and Iran coach Queiroz felt the game should have been over by half-time.

"We always have intention to score and it only takes one small mistake, one rebound, and something can happen. If we score three goals, as we should have in the first half, at least then the game was finished."

Knock-out stages 'will be different'

Egypt had hit the woodwork three times in their win over Guinea-Bissau and former West Bromwich Albion defender Ahmed Hegazi said his team need a little more luck in front of goal.

"It's (finishing) not a weakness. It's very good we have so many chances," he told BBC Sport Africa.

"I think we have very good players at finishing. [We were] just unlucky today and in the next games we will be much, much better and we have to practice for everything."

Having finished as runners-up in Group D, behind Nigeria, the Egyptians face the winners of Group E, which could be any one of Ivory Coast, Equatorial Guinea, Sierra Leone or Algeria.

Hegazi says that they are not looking beyond that game on Wednesday, 26 January in Douala.

"We are learning from every game we play - losing or winning, we have to learn and prepare for the next game," the 30-year-old centre-back said.

"What we've learned is there is no small team in Africa now, so every team is organised and every team has good coaches. Every team is a strong team, all have something, so we have to accept this."

For his part, Queiroz, who twice worked with Sir Alex Ferguson as Manchester United's assistant manager, points out that the stakes increase from now on at the tournament.

"Now it's everything to the winner and nothing to the loser so the profile of the games is completely different," he said.

"Nobody wants to take risks at the beginning (of the tournament) and the games are not open because we only play for results - nothing more."