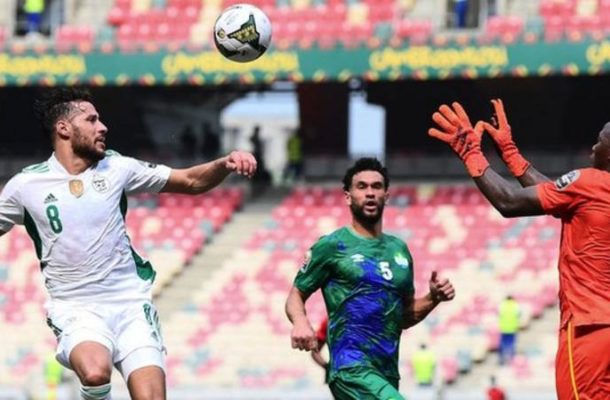 Algeria began the defence of their Africa Cup of Nations title with a goalless draw against a stubborn and spirited Sierra Leone side in Group E.

After the break Algeria forward Yacine Brahimi shot straight at keeper Mohamed Nbalie Kamara, who also tipped a low shot from Riyad Mahrez past the post.

Former England defender Steven Caulker, who recently switched international allegiance to Sierra Leone, made two crucial blocks to help his side to a clean sheet on their first Nations Cup appearance since 1996.

The draw saw Algeria extend their unbeaten run to 35 senior internationals, edging closer to Italy's world record of 37 matches without defeat, but coach Djamel Belmadi will be frustrated his charges failed to find a way past a side ranked 108th in the world.

The Desert Foxes continually carved out opportunities in the second half but were let down by their finishing - with substitute Said Benrahma skewing a shot wide with five minutes remaining after coming off the bench.

Bensebaini cut into the box and had his low shot gathered by Nbalie Kamara in the first minute of injury time before striker Bounedjah sent a free header from a corner straight at the Leone Stars number one, who sank to his knees in celebration at full-time.

There were occasions where the Sierra Leone keeper had ridden his luck in Douala's Japoma Stadium, having frequently come to the edge of his box in an attempt to cut out danger.

Nbalie Kamara pulled off a successful sliding block tackle on Islam Slimani in first-half stoppage time and, midway through the second half, saved a shot from Manchester City winger Mahrez just inside his area following a weak header clear.