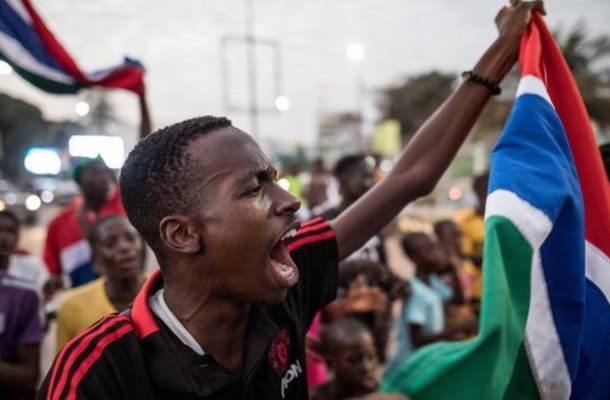 The Gambia's historic 1-0 win over Mauritania at the Africa Cup of Nations prompted joyous celebrations across the country on Wednesday evening.

Belgium-based winger Ablie Jallow had the honour of scoring his country's first goal at a Nations Cup as he struck delightfully after just ten minutes for the tournament debutants in Limbe, Cameroon.

Jallow's stunning effort clinched victory for the tournament's lowest-ranked side in their opening Group F tie and sent a nation into rapture.

"I was watching from home and immediately after the final whistle people started celebrating on the streets," Gambian sports journalist Sheikh Tijan Gaye, who lives in the capital Banjul, told BBC Sport Africa.

Gambians were out on streets across the country with drivers honking their horns in Banjul and Serrekunda.

Until their qualification last year, the Scorpions were the only West African side to have never contested a Nations Cup.

The match prompted The Gambia President Adama Barrow, whose government approved a budget of just over $2m for the team's tournament preparations, to post his first Twitter entry of the year, a photograph of him watching the match with cabinet colleagues.

The main opposition leader, Ousainou Darboe, was also proud to be watching and congratulated the Scorpions for spreading joy across The Gambia.

"Congratulations our Scorpions, we're all proud of you, you've done what is expected of you," Darboe said.

"We congratulate you and we continue to support you, I'm sure you will continue so that you will keep the flag flying."

The Gambia first tried to qualify in the mid-1970s for the Nations Cup, which then featured eight teams, but only succeeded last March, with the tournament now a 24-team competition.

They are doing so nearly two decades on from their junior sides impressing when qualifying for both African, where they were U-17 champions in both 2005 and 2009, and global age-level competitions.

Featuring players who turned out at such events as the 2005 Under-17 World Cup, such as Pa Modou Jagne and Ebrima Sohna, The Gambia used some of that know-how when keeping Mauritania at bay as a nation followed spellbound.

"Gambians have been supporting the team throughout the build-up to the match on social media while many wore the national team jerseys," added journalist Gaye.

The Gambia, who next play Mali in Limbe on Sunday before meeting Tunisia on 20 January in their Group F decider, are ranked 150th in the world by Fifa.