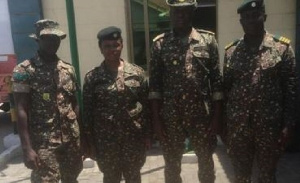 The border patrol team of the Aflao Command of the Ghana Immigration Service has busted 31 slabs of suspected cannabis from smugglers attempting to cross with the consignment into the Republic of Togo.

The team in the early hours of April 15 foiled the attempt by syndicated motor-riding smugglers trying to move the commodity across Ghana's border through unapproved route -'beat' eleven in the Ketu South Municipality.

Assistant Inspector, Mr Felix Klu-Adjei, Volta Regional Public Relations Officer of GIS, told the Ghana News Agency that the patrol team encountered the smugglers at about 0100 hours and was suspicious of the movement of two motor riders, who were trying to recce the location for easy operation.

He said four motor-riders then emerged from a nearby bush soon after the disappearance of the earlier two with the compressed parcels in an attempt to smuggle the consignment from the Ghana side of the border into the Republic of Togo.

Mr. Klu-Adjei said the team stood their grounds to disallow the illegal movement of the contraband goods, which the smugglers fiercely resisted resulting in threats of death.

He said when their resistance was neutralized by quick reinforcement of officers, the smugglers then recoiled, started persuading, and eventually attempted to offer money, which was decisively declined.

Assistant Inspector Klu-Adjei said the consignment was consequently seized but the smugglers managed to escape with their motorbikes.

He said the consignment was in the custody of the Aflao Command for further investigation and subsequent handover to the Narcotic Control Board (NACOB).