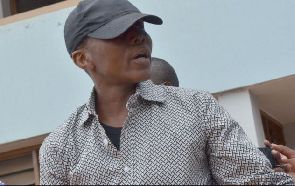 Gregory Afoko, the man standing trial over the murder of the Upper East Regional chairman of the New Patriotic Party (NPP), Adams Mahama, was spotted with hand swollen as he appeared in court yesterday.

The Accra high court that is hearing the case was forced to adjourn the murder trial of 52-year-old Gregory Afoko due to the court’s inability to find a Hausa interpreter.

Although the court had arranged for an interpreter during the previous sitting, there was no one for the hearing to continue.

But eager to continue the trial, the judge, Justice L. L. Mensah, asked if any member of the jury could speak “impeccable” Hausa to assist the court but there was none.

This was after Chief State Attorney Matthew Amponsah had requested the court to change the interpreter in the case for the sake of “fairness.”

The judge explained that it was wrong for the court to adjourn the case because of the absence of an interpreter.

Ekow Ampah-Korsah, lead counsel for Gregory, rejecting the request, said the prosecution must put in the request formally.

However, Israel Ackah, a member of the defence team disagreed, insisting that the prosecutor was calling for a new interpreter because it (prosecution) wants the current interpreter to interpret the case in a “certain way.”

He claimed that at the previous hearing the prosecution was putting words in the mouth of the interpreter.

Israel argued that the interpreter whom he saw as someone who has just begun his job, be allowed to continue the case.

Matters got worse when Amponsah informed the court that one of the jurors had told him that a member of the jury was indisposed.

This compelled Mr Ekow Ampah-Korsah to accuse the prosecution of having “ex-parte conversation” with the jury, especially when the fate of his client is in the hands of the state.

He said the defence team was not enthused about the development.

Amponsah explained that there was nothing “secret” about the conversation because it happened in “open court.”

Justice Mensah said interpretation was a difficult job adding, “that we are all blind, we can’t speak Hausa…Interpretation is key.”

Israel said Gregory’s arm was swollen and urged the court to allow his client to seek medical attention.

He posited that Afoko (a farmer) should be transferred to either the Korle-Bu or the Police Hospital for treatment, a request the judge honoured.

Granting the application, Justice Mensah ordered the director of the prisons where Gregory is on remand to send him to the nearest medical facility for medical attention, but warned the authorities to take the necessary precautions.

Hajia Zainabu Adams, wife of Adams Mahama, was asked to continue her evidence in the case as the first prosecution witness.

At the previous sitting, Zainabu said her husband described the accused as the younger brother of Paul Afoko, suspended national chairman of the New Patriotic Party (NPP) and one Asabke Alangdi as those who poured the deadly substance on him, leading to his death.

Gregory Afoko, is being tried on charges of conspiracy to commit crime and murder of the late NPP Upper East Regional chairman in May 2015.

Meanwhile, Gregory Afoko has pleaded not guilty to the charges.

Gregory was charged for conspiracy to murder and murder while his alleged accomplice, Asabke, is still on the run.

However, Musa Issah, a purported third accomplice, was freed because there was not much evidence to connect him to the crime.