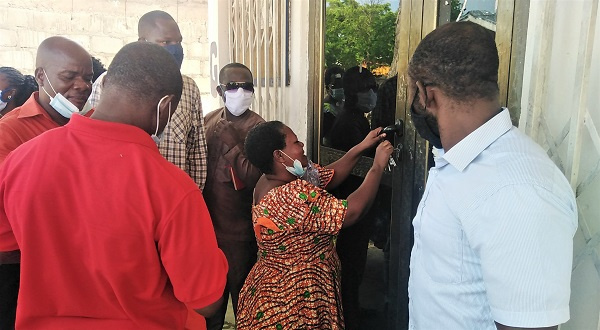 Members of the Ghana National Association of Teachers (GNAT) in the Kassena-Nankana Municipality in the Upper East Region, have kicked against the 4% and 7% salary increment, by locking up its office at Navrongo indefinitely.

The aggrieved teachers, who gathered from various schools in the area, in a peaceful protest on Monday, August 2, 2021, drove the GNAT municipal secretary and his office assistant out of the premises, locked and barred the entrance of the office with pieces of red cloth to register their rejection of the increment.

The teachers, clad in red headbands, chanted their displeasure in the increment, stating that their leadership had failed in representing their interests.

Atadana Felix, convenor of the protest speaking to GhanaWeb stated that the 4% and 7% increment was inadequate and cannot support the expenses of teachers some of who spend so much to perform their duties.

He said the leadership of GNAT failed to justify on behalf of members why an upward adjustment for teachers was necessary and must be done with consideration to the country’s current economic conditions.

He explained that it was the hope of teachers to enjoy an increase following the assurance by the President that the country’s economy was recovering and performing better.

Mr. Atadana demanded their leadership to publicly kick against both the 4% and 7% increment and go back to the negotiation table with the government.

He hinted that members will continue to embark on similar protests should the leadership fail to arrive at a better percentage with the government. He also stated that the teachers will go further to ensure leaders are removed from their positions if they fail to represent the interests of members.

“As a teacher, I expect to be comfortable. I expect to be able to pay my rent and be able to send my children to school and be able to take transport to my school to do my work. So, we asked our leaders to go and negotiate on our behalf and they have gone and agreed on 4% now and 7% next year. We don’t know why they agreed to the 4% and 7% when the President said the economy is recovering faster than expected. They should explain to us why they agreed to the 4% and 7%.”

“We have two demands for leadership of GNAT. They should come out publicly and tell Ghanaians that they have rejected the 4% and the 7%. If they fail to do so, we will appear again and this time, they will no longer represent us. We are not going to back down on this. We are asking them to go back and negotiate. If they knew that the negotiation didn’t go well, they should have come back and told us that what they proposed to the government failed.

But we didn’t see that. They just accepted and went back home in silence. But we won’t accept that. We are demanding of them to go back and negotiate,” they lamented.

The teachers made it clear that they do not blame the government for the meagre increment. They insisted leadership of the association failed to demand better conditions of service for members which they would not accept. They said the GNAT office will remain closed until leadership takes steps to address their concerns.

GhanaWeb’s efforts to contact GNAT leadership in the Upper East Region to comment on the development proved futile.