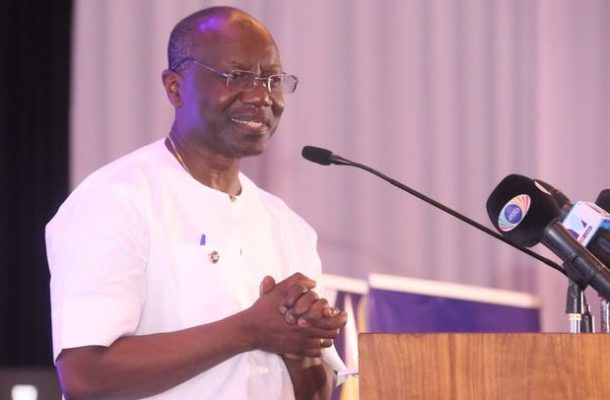 The Finance Minister, Ken Ofori-Atta has charged the Board of the Minerals Incomes and Investment Funds (MIIF) to address all concerns raised by various stakeholders about the Agyapa Royalty Deal before it goes back to Parliament.

According to Mr. Ofori Atta the deal is good for Ghana, hence the MIIF must work to ensure it overcomes all the concerns raised against it, so the country can immediately create the first mineral royalty company.

The Finance Minister who made the call while inaugurating the nine-member board of the Mineral Income Investment Fund in Accra on Tuesday, October 12, 2021, wants all the necessary consultations to be carried out before the deal is submitted to Parliament.

"You must continue with the work that has been done following the theme of the budget ‘Continuity, Consolidation and Completion’ and address and overcome all the concerns against the Agyapa transaction, so we can go to the market and create the first mineral royalty company in Ghana and in Africa because it is good for Ghana."

The Agyapa Royalty deal was proposed by the government last year to raise funds through minerals royalties for key infrastructure projects, but could not be passed after stakeholders rejected the deal.

“The Attorney General has looked at it. We had a few stakeholder meetings, and I think the new board should be energised to review that and go through the parliamentary process. I’m unequivocal that it is the way to go in terms of monetising our minerals and finding a way to leverage mining,” he added.

In 2018, Parliament passed the Minerals Income Investment Fund Act 2018, which establishes the Fund to manage the equity interests of Ghana in mining companies and receive royalties on behalf of the government.

The purpose of the Fund was to manage and invest these royalties and revenue from equities for higher returns for the country’s benefit.

In exchange, the company planned to raise between US$500 million and roughly $1 billion for the government on the Ghana and London Stock Exchanges to invest in development projects.

However, the deal became a subject of hot debate after the opposition National Democratic Congress and some stakeholders kicked against it.

The woes of the deal were subsequently compounded by a 64-paged corruption risk analysis report released against the deal by the then Special Prosecutor, Martin Amidu.

The government subsequently suspended the deal.