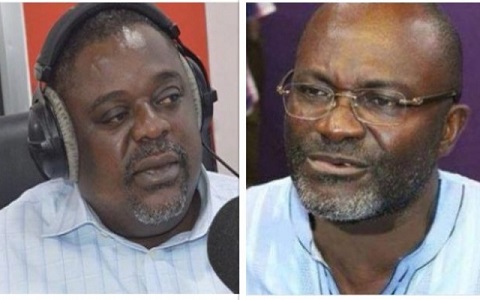 Assin Central MP Kennedy Agyapong has dared Deputy General Secretary of the National Democratic Congress (NDC), Koku Anyidoho, to a two-man boxing bout and threatened to beat the latter mercilessly for peddling falsehood about his alleged involvement in drugs.

Describing Mr Anyidoho as “chicken”, the businessman told Oman FM's 'National Agenda' morning show on Wednesday, 13 December that Mr Anyidoho tried to force the police and drug suspect Asem Darkey, to include his (Agyapong’s) name in an alleged list of suspected drug barons as far as the 77 missing parcels of cocaine saga was concerned.

“I have the police officer here who can come and testify”, Mr Agyapong said.

Asem Darkey a.k.a 'Limping Man', was given a 22-year jail term by an Accra Fast Track Court for his role in the disappearance of the 77 parcels of cocaine on board the MV Benjamin vessel years ago.

Mr Agyapong maintained that: “Koku Anyidoho pushed the guy and if you remember, he was going around threatening that the passports of the people involved will be seized because there are big names involved and those people want to travel. But all that was cooked up by Koku Anyidoho”.

The Assin Central MP claimed “the guy [Asem Darkey] involved said he does not know me and the police declined to drag me in the matter”.

Mr Agyapong said he wants a bout with Mr Anyidoho so he can punch him in the stomach ceaselessly until he soils himself with his own faeces.

“I dare him, if he claims he is a man, a ring should be provided for the two of us. We’ll fight till one of us dies,” he said.

Mr Agyapong swore never to forgive Mr Anyidoho for allegedly attempting to plant his name in the missing cocaine saga but noted that he has restrained himself because he did not want to sully the name of the Akufo-Addo government.

Mr Agyapong threw the challenge to Mr Anyidoho during a discussion on the petition by some workers of the Electoral Commission to have their chairperson, Mrs Charlotte Osei, removed, a case which the NDC Deputy General Secretary is reported to have accused the president and vice-president Dr Mahamudu Bawumia of being behind.

“Akufo-Addo and Bawumia passed bad comments about the EC boss and so the impeachment approach started from them; this is very political coming from the top. They want to manipulate the system and that is why they want EC officials out in order to massage the DCE elections in 2019 and the main elections in 2020. Let them attempt and we are watching them,” Mr Anyidoho alleged.

“Nana Akufo-Addo is interested in getting rid of Charlotte Osei, and in opposition they did not hide their dislike for the EC boss. They are not being fair to the EC Chair. NPP made it manifestly clear that they will get rid of Charlotte Osei and this action shows clearly that they are behind her impeachment,” Mr Anyidoho said in an interview on Okay FM’s 'Ade Akye Abia' Morning Show following the hearing of the petition against Mrs Osei by a panel constituted by the Chief Justice Sophia Akuffo.