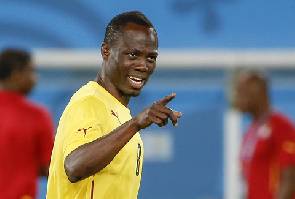 Ghana will be chasing a fourth successive appearance at the Mundial, and the Udinese influential player said, though qualifying for the World Cup will be challenging, he is optimistic the Black Stars will be at the biggest football competition.

Badu stressed that, the national team have the capabilities and qualities to qualify and that the team is poised to hoist the flag of Ghana.

He said ‘‘qualifying for World Cup is more challenging than African Cup, but the former comes with a lot of benefits such as the country ‘s profit and the players gain respect and are rewarded contracts from foreign clubs which brings joy to family members.
 
‘‘The national team has all the capabilities to qualify. This is the fourth time we will fight for the country to win; I’m very confident that we’ll qualify’’.

He added that the team is not focused on the financial benefits, but rather the glory and prestige it brings to the country when performing well at the world stage.

‘‘It’s not always about money, the players have the nation at heart despite all the negative perceptions about us, and the fact that we put money before our work, I am 100% or 120% sure that we are ready to work. We know where we want to take the country to and we are ready to move forward,’’ he said.

Ghana is paired with Egypt, Uganda and Congo and will start her campaign with Uganda at the Tamale Sports Stadium in October.