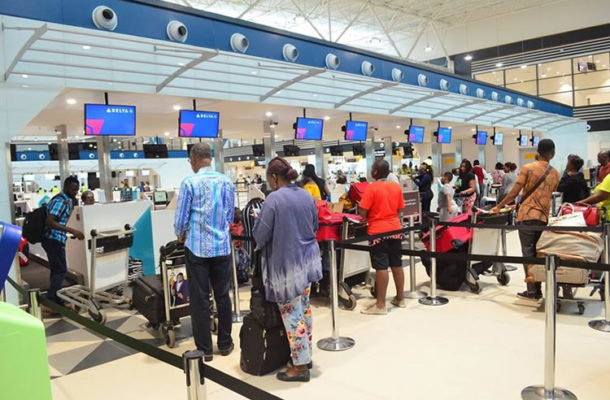 The workers of the Ghana Airport Company Limited (GACL) are accusing management of running down the company.

While accusing the manager of the company, Mr. Yaw Kwakwa of mismanagement, the workers also say issues of promotion and staff welfare are not being looked at.

The outrage of the workers led to the disruption of all departures at the Kotoko International Airport (KIA) on Friday morning following the indefinite withdrawal of services of all general staff at the airport on the orders of the Divisional Union of the Public Services Workers Union at the Ghana Airport Company Limited.

Friday’s withdrawal of services which began with mandatory screening services, flight display and announcements, was occasioned by alleged attempts by the Board of the company to shelve a report which confirms allegations of mismanagement and abuse of office levelled against the Managing Director.

However, speaking to Citi News, Deputy General Secretary of the Public Services Workers’ Union (PSWU) at the Airport, John Sampah said the unhappy workers are demanding the immediate removal of the Managing Director for the survival of the company.

“If the situation is not checked, then the GACL will be run down. Their point is that until the Managing Director is removed from the company, the company will be brought down.”

The aggrieved workers say the future of the company was being risked by maintaining Mr. Kwakwa.

“Our expectation is that the Managing Director must be removed. If we allow this man to continue sitting in office, the fortunes of this company can only dwindle and the staff will not be ready for that. If he is not removed we are not backing down. We will continue increasing our levels of withdrawal of service until we get what we want,” Divisional Chairman of the PSWU at the Airport Company Limited Abdul-Issaka Bamba had earlier stressed.

The union has previously agitated over this same issue and also petitioned President Akufo-Addo on the matter.

In the petition, the workers said Mr. Kwakwa had demonstrated  “gross incompetence, insensitivity and lack of understanding of the critical aviation industry and therefore his continuous stay in office will further derail the progress of the company”.

They accused Mr. Kwakwa of deliberately refusing to implement several reports lying on his desk for over two years and outsourcing key aspects of the company’s operations at exorbitant costs despite the availability of in-house capacity.

Meanwhile, the management of the company is yet to respond to the claims.