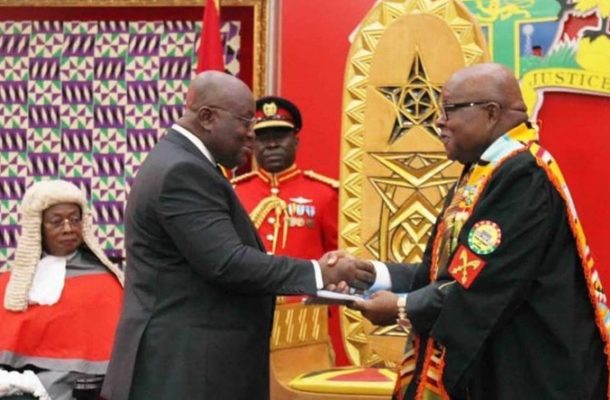 President Akufo-Addo has dismissed a petition that sought to have the Speaker of Parliament removed over allegations of stated misbehaviour, abuse of power and corruption arising out of the proposed controversial new chamber for parliament.

Alliance for Social Equity and Public Accountability (ASEPA) on July 9 petitioned the President to under Article 146 of the 1992 constitution, trigger impeachment proceedings against Prof. Ocquaye.

ASEPA had claimed the Speaker, Prof. Mike Ocquaye, acted ultra vires by not seeking “the necessary approvals from parliament and the public procurement authority” before initiating processes for the construction of the new chamber, which has since July 8 been put on hold due to public outcry.

The group claimed Prof Ocquaye breached the public procurement laws of Ghana by single handedly “handpicking an architect to design the prototype for the new chamber without any tender process”.

“This, we believe, constitute stated misconduct and abuse of office and provides enough grounds for the removal of the Speaker from office in accordance with the constitution of the republic of Ghana,” he contended in the petition,” the petition indicated.

But Nana Bediatuo Asante, Secretary to the President, has in a response to the petition stated Nana Akufo-Addo cannot remove Prof. Mike Ocquaye as Speaker of Parliament citing constitutional constraints.

“Inasmuch as we respect the exercise of your rights as a citizen of Ghana, we are constrained to inform you that the President has no power under the constitution and laws of Ghana to remove the speaker of parliament from office,” the July 19 letter by Nana Bediatuo Asante read in part.

The country’s 1992 constitution, the Secretary to the President said, safeguards strict separation of powers to prevent one arm of the state from interfering in the affairs of another, except as provided by the constitution.

“Accordingly, your petition is hereby refused,” the letter concluded.