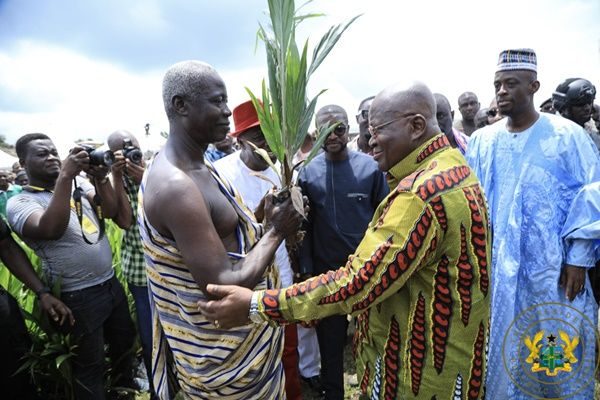 The President of the Republic, Nana Addo Dankwa Akufo-Addo, has thrown a challenge to his predecessor, John Dramani Mahama, to name a single policy his erstwhile government introduced to boost the production of cocoa in the country.

Addressing a durbar of Chiefs at Daboase, in the Wassa East district of the Western Region, on Tuesday, 23rd July, 2019, President Akufo-Addo noted that the government of President Kufuor moved cocoa production from some 350,000 metric tonnes at the end of the year 2000 to 750,000 tonnes at the end of 2008, and had projected Ghana to hit the million metric tonnes by 2010, a feat which was realized under the late President Mills.

With the introduction of his government’s policies such as the hand pollination, mass pruning of cocoa trees using motorized pruners, early spraying of cocoa farms, motorized slashers to replace the use of machetes, and the piloting of irrigation schemes for cocoa farms to ensure all year-round production, President Akufo-Addo threw a challenge to his predecessor.

“When Hon. J.B. Aidoo was speaking, he asked for one policy of the previous NDC government that has boosted agricultural production and cocoa production. I want to hear from them what they are going to say to this challenge. We are challenging them to come and tell us what they have done that is boosting agricultural and cocoa production in Ghana. I can tell you the answer in advance – Zero! Zero! Zero!” the President stressed

According to the President, the simple answer to that questions is that “you (Mahama) did not speak the truth to Ghanaians. You didn’t do the work you said you had done. We are the ones who are doing the work, so give us space to do it, instead of touting falsehoods.”

On his part, the Chief Executive Officer of COCOBOD, noted that the administration of President Akufo-Addo spent the first two years in office clearing the arrears inherited from the Mahama government. Indeed, he added that in the last 10 days of 2016, i.e. from 20th December to 31st December 2016, when President Mahama knew he had lost the 2016 election, the $400 million that was in the COCOBOD account was expended.

“We came into office, and spent the first two years to clear all the arrears inherited from the Mahama administration. The process of constructing cocoa roads is about to begin. Government has approved the disbursement of GH¢3 billion to construct 350 cocoa roads across the country. Secondary evacuation roads, i.e. trunk roads, are also going to be constructed,” he added.

Whilst Cote d’Ivoire, in 2010, was producing 1.1 million tonnes of cocoa, they increased the production of cocoa to 1.8 million tonnes, even though fertilizer is not distributed to their farmers free of charge.