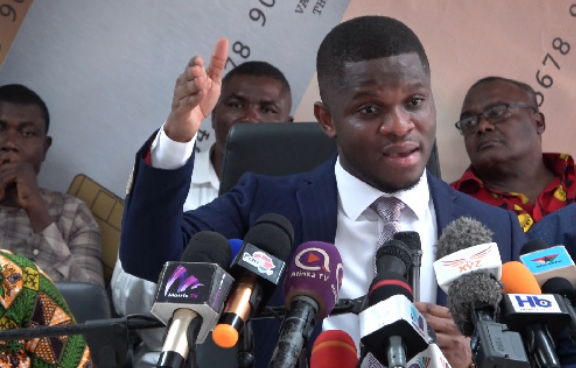 National Communications Officer of the National Democratic Congress (NDC) Sammy Gyanfi has accused the Akufo-Addo government of bastardising security agencies in the country.

According to him, the military and police are increasingly becoming partisan under the NPP government.

“The Armed forces is being bastardised left right and centre, as for the police, they have been rendered useless. For all the police and soldiers in uniform who are being partisan, we want to let them know that there will be retribution. And for the few ones who still have their integrity and conscience intact, this is the time to rise up and be counted because we want to tell those bad ones that we shall fish them out and deal with them. That includes the Efutu Police commander,” he warned at a press conference in Accra Wednesday.

The party has called on President Nana Akufo-Addo to arrest and prosecute the Minister for Development and Special Initiatives, Mavis Hawa Koomson, for firing a gun at a registration centre.

The MP who has confessed firing a warning shot at the centre claimed it was to defend herself after feeling threatened while touring registration centres at Kasoa.

Civil Society groups, as well as security analysts, have called for her arrest, prosecution and resignation.

According to him, the MP is unfit to hold herself out as a lawmaker and also as a member of the ruling New Patriotic Party.

Addressing the Media, Director for Elections for the opposition NDC Elvis Afriyie Ankrah said if President Akufo-Addo fails to prosecute the Minister, the next NDC government under John Mahama will ensure that the minister faces the law.

“If Hawa Koomson is left off the hook by President Akufo-Addo, I want to assure the people of Ghana that the next NDC government in January 2021 will arrest and prosecute her,” Mr Afriyie-Ankrah said.