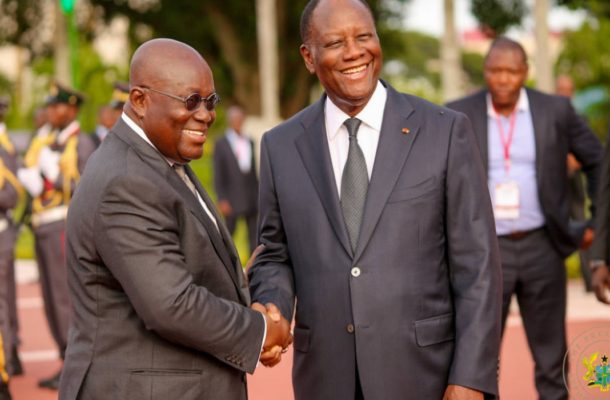 President Akufo-Addo on Tuesday left Ghana for the Ivory Coast, as he joins other world leaders to mourn the death of Hamed Bakayoko, the country’s Prime Minister, the presidency said in a statement.

The funeral will be held on Wednesday, 17th March, in Abidjan, capital of Cote d’Ivoire.

Bakayoko died from cancer in the German city of Freiburg, where he was receiving medical treatment, according to the government.

His death on Wednesday came two days after his 56th birthday and some eight months following the passing away of his predecessor.

An eight-day period of national mourning for the late Prime Minister was announced by President Alassane Outtarra last Thursday, with the burial scheduled for Friday, 19th March.

In his capacity as ECOWAS Chairman, President Akufo-Addo was accompanied by the Minister for Foreign Affairs, Hon. Shirley Ayorkor Botchway, MP, and officials of the Presidency and the Foreign Ministry, the statement from the presidency said.

“The President will return to Ghana on Wednesday, 17th February, 2021, and in his absence, the Vice President, Alhaji Dr Mahamudu Bawumia, shall, in accordance with Article 60(8) of the Constitution, act in his stead”, the statement indicated.