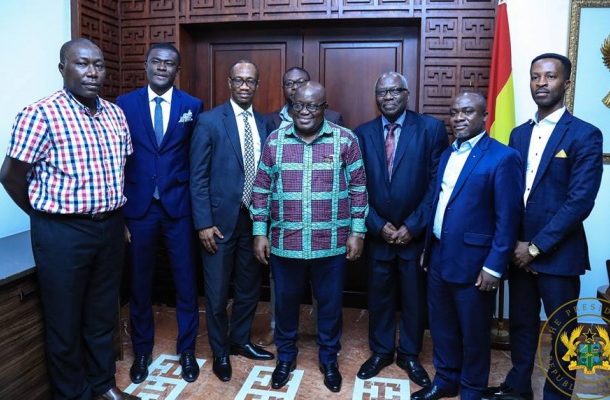 President Akufo-Addo has met with the leadership of the Alumni association of the University Hall (Katanga) and Unity Hall (Conti) of the Kwame Nkrumah University of Science and Technology (KNUST) over the brouhaha in relation to the conversion of the halls.

The meeting was necessitated following an ongoing tussle between the management of the Kwame Nkrumah University of Science and Technology (KNUST), and students of University Hall (Katanga) and Unity Hall (Conti), over the recent conversion of the two all-male hall of residence into mixed-gender ones.Mr Akufo-Addo met alumni of the two halls at the Jubilee House on Wednesday, 19 September 2018 and received a petition from the group, after engaging in discussions over the conversions of the halls.According to the President, he will engage with the university’s management on the matter and directed the alumni to also present a copy of the petition to the Governing Council of the tertiary institution. The joint delegation was led by Charles Dontoh, President of the Kantanga Alumni Association.The other members of the delegation were: Stephen Asante Bekoe, legal adviser and counsel for the Katanga Alumni; Osei Agyemang-Badu, a Katanga alumnus; Patrick Baah Dadzie, Secretary to the CONTI Alumni Association; Anthony Avege, Organising Secretary to the Katanga Alumni; Daniel Adjokatcher, Protocol Officer of the Unity Hall Alumni and Stallone Nyarko, Public Relations Officer of the Unity Hall Alumni.