Akufo-Addo put at risk of swine flu after KUMACA visit 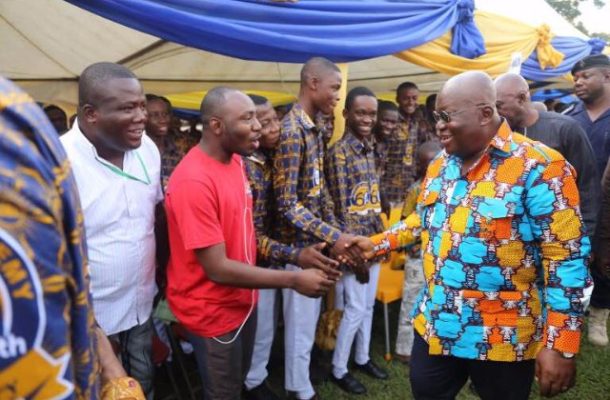 President Akufo-Addo was put at risk of contracting swine flu after he attended an anniversary celebration at Kumasi Academy in the Ashanti Region, after two students died of the infectious disease.

The Health Ministry was notified on December 1, 2017, that two students had died of an unknown disease on Thursday, November 30, which some believed was meningitis.

This was because seven students had allegedly died of meningitis between April and October.

"They were thinking about meningitis and the way it spreads it's not like Influenza", he said.

Not suspecting any health danger, the President was at the scene of the infection, KUMACA, as the Special Guest of Honour for the school's 60th-anniversary celebrations some 24 hours after the Thursday deaths were confirmed.

It is unclear if the President was informed of the deaths which first began last April and resurfaced in November.

But the president was seen shaking hands and interacting cheerfully with students and teachers. Influenza can be spread by bodily contacts.

Three days after the President's visit, two more students died and 18 others were hospitalised which rose to 44.

Over 1,000 students have received some drugs to protect them even before the Influenza was confirmed.

Since the confirmation, 44 students hospitalised have been discharged after receiving treatment.

But the Minister maintained, the president is not at risk of contracting the disease.

"When we realised that he went there on Saturday without stopping him, we alerted his doctor and I think the President is in a very good condition," he told host Kojo Yankson.

"Between Friday and Saturday, nobody would have thought that this was the situation that we were going to go through. So I must admit that we put the president at risk", he said.

The Health Minister said the President was informed of the situation but is yet to be briefed of the confirmation of Influenza.

It will be done Friday morning, he said.

The Health Ministry's fresh headache is how to trace parents who came for their wards before drugs could be administered or disease confirmed.