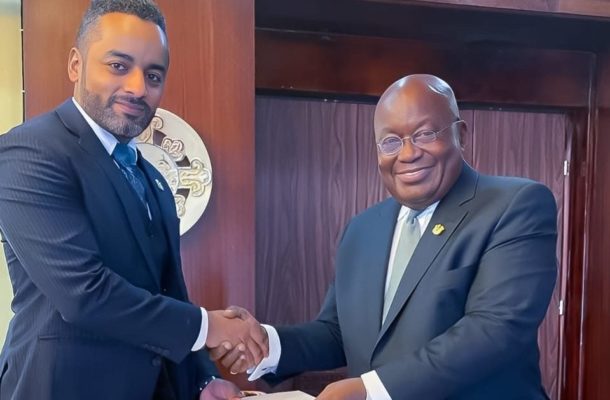 President of the Republic of Ghana, Nana Addo Dankwa Akufo-Addo has received a personal message from his United Arab Emirates counterpart, His Highness Sheikh Mohamed bin Zayed Al Nahyan, President of the UAE.

President Akufo-Addo received the message when he welcomed the Chargé d’Affaires of the UAE Embassy in Accra, Mr. Amer Al-Alawi, to the seat of government, Jubilee House in Accra on Wednesday, 10th August 2022.

During the meeting, Mr. Amer Al-Alawi conveyed to President Akufo-Addo “the greetings of His Highness Sheikh Mohamed bin Zayed Al Nahyan” and his “best wishes for good health and success for President Akufo-Addo and further progress and prosperity for Ghana’s friendly people”.

On his part, President Akufo-Addo wished His Highness Sheikh Mohamed bin Zayed Al Nahyan good health and well-being for His Highness, and further progress, success and prosperity for the good people of the Emirates.


President Akufo-Addo while receiving the enclosed message from Mr. Amer Al-Alawi also expressed his hope that bilateral relations between the United Arab Emirates and the Republic of Ghana will continue to grow from strength to strength.

During the meeting, the Chargé d’Affaires briefly reviewed the development of bilateral relations between the UAE and Ghana in various fields, such as joint cooperation at the bilateral and multilateral levels in international forums and the pursuit of unique opportunities available to both nations. Mr. Amer Al-Alawi finally delivered a sealed message from His Highness Sheikh Mohamed bin Zayed Al Nahyan, President of the UAE to President Akufo-Addo.

Ghana and UAE have over the years evolved into allies with fully matured relations at all levels. Both countries are currently serving as Non-Permanent members of the United Nations Security Council for a two-year term that started on January 1, 2022, as part of a 15-member UN body, which is charged with maintaining international peace and security.

President Akufo-Addo visited the UAE in November 2019 where five (5) agreements in different fields were signed and are at various stages of implementation, including a Visa-waiver deal between Accra and Abu-Dhabi.

In recent times, President Akufo-Addo visited the UAE in March this year as part of the Expo 2020 Dubai, where Ghana Day was commemorated and various Trade and Investment agreements were signed, including a Memorandum establishing the Emirati-Ghanaian Business Council.

As part of that visit, President Akufo-Addo was received at Al Shati’ Royal Residence in the UAE Capital city of Abu Dhabi where he met now UAE President, His Highness Sheikh Mohamed bin Zayed Al Nahyan to discuss issues of interest to both nations.

Also, earlier this year, the government of Ghana joined global voices to strongly condemn a Houthi militia attack on civilian areas in the United Arab Emirates and the Kingdom of Saudi Arabia, including the Abu Dhabi International Airport.