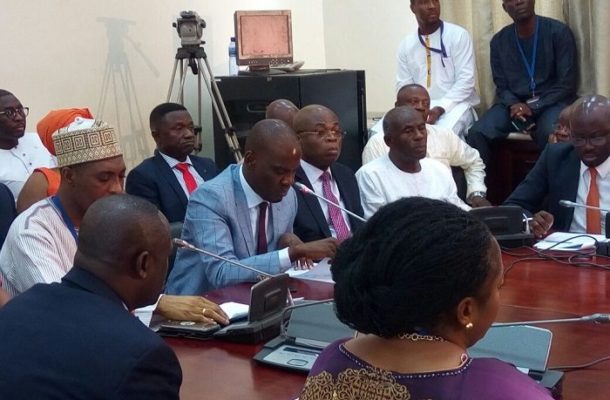 The nomination of Mrs Jean Mensa as new Electoral Commission chair with two other deputies and a member has left the Minority in Parliament fuming in anger.

Members of the Minority in Parliament have taken turns to criticize the president’s nominees set to replace Mrs Charlotte Osei, Mrs Georgina Opoku Amankwaa and Amadu Sulley, all of whom were removed for stated misbehavior.

The Minority members are not only angry with the president for what they say is his “indecent haste” to replace the three officials, they are even more scandalized by the decision to nominate Mrs Mensa of the Institute of Economic Affairs, Dr Eric Bossman, head of the Political Science Department of the University of Ghana, Mr Samuel Tettey Director of Electoral Services, Electoral Commission as replacements for the sacked EC bosses.

Mrs Adwoa Asuama Abrefa, a corporate lawyer who was also in the list of new nominees, announced by the president as a member of the Commission, takes over from Mrs Pauline Dadzawa who is on retirement.

ABA Fuseini who is MP for Sagnarigu said the president is in an indecent haste to dismember EC and put appointees.

He did not understand why the president will go ahead to nominate four persons to replace the sacked EC bosses when a group has gone to court restraining the president from appointing new EC chairpersons.

According to him, the NPP did not hide its intentions to remove Charlotte Osei, alleging the petition which formed the basis for the removal of Mrs Osei was unfounded.

He said for the president to even go ahead to appoint Jean Mensa, someone the NDC has a problem with, as the new EC Chair gives credence to the fact that the NPP has an ulterior motive to rig the 2020 elections.

He said the NPP government is “so hopelessly uninspiring” it wants to pack the EC with its own members in order to rig the upcoming elections.

He said the president’s EC nominations are “insensitive and inappropriate.”

Prampram MP Sam George conceded Jean Mensa is competent but her affiliation to the NPP is not hidden and makes her nomination a wrong one.

He said the activities of Mrs Mensa during the 2016 elections clearly expose her political biases and should not have been appointed.

Akandoh maintained the president’s rigging machinery has been set in motion with the appointment of the chairpersons.

While he did not mention names, he said one of the nominees, a lecturer, is known to be politically affiliated to the NPP.

Dr Bossman one of the Deputies nominated is head of the Political Science Department of the University of Ghana.

Akandoh said students have testified that the nominated Deputy EC Chair who is a lecturer is clearly affiliated to the NPP and cannot be appointed.

But the Majority in Parliament has defended the president’s nominations.