Akufo-Addo should sack some ministers at all cost - Dr. Benjamin Otchere 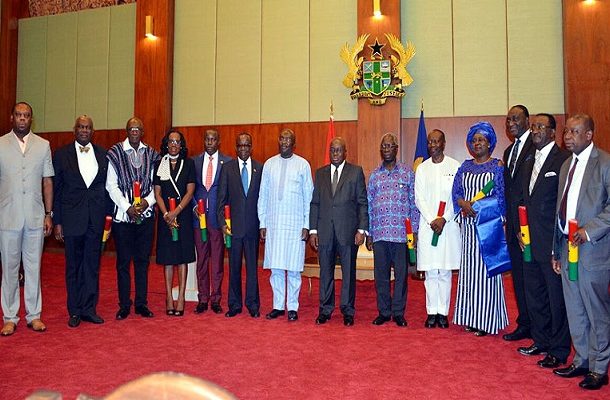 President Akufo-Addo with some of his ministers

Social commentator and a lecturer with the Central University, Dr Benjamin Otchere-Ankrah, says the reduction of the size of Akufo-Addo's ministers is a must for him.

According to him, some of the appointees in the current administration "are nothing but incompetent."

After a successful inauguration on January 7 for the commencement of his second term, the President is expected to make new appointments in the coming week.

As it now stands, President Akufo-Addo is working with 123 ministers, the biggest size in the history of the country since the institution of the Fourth Republic.

But contributing to a studio discussion on Peace FM's Kokrokoo morning show monitored by Ghanaguardian.com, Dr. Benjamin Otchere opined the President at this time has no justification in minimizing the numbers. To him, some of the ministers are adding no value to his governance.

"I hear the President will start making new appointments in the coming week. He should reduce his ministers at all cost. Some of the ministers are nothing but incompetent." He said.

Dr. Otchere-Ankrah further indicated that aside from sacking some ministers, Mr Akufo-Addo should consider "merging" some of the ministries to save the public coffers.

The lecturer, therefore, suggested that the President should consider working with a total of 80 ministers, that in his view, "is the most suitable".