Akufo-Addo will not lie to us - Suaman Chief 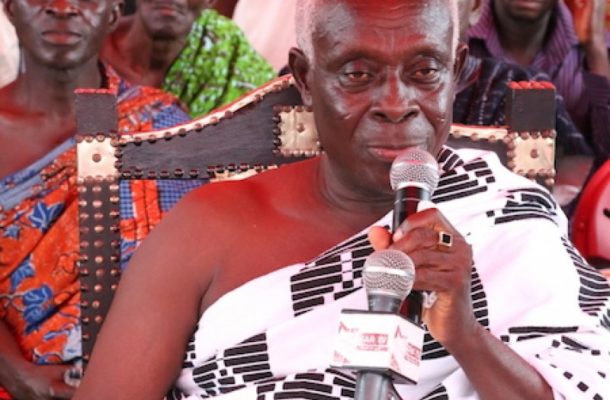 The Krontihene of Dadieso, in the Suaman constituency, Nana Armah Kofi III, is confident that the 2016 presidential candidate of the New Patriotic Party, Nana Addo Dankwa Akufo-Addo, will deliver on his ‘1-District-1-Factory’ policy’, when he is elected President in the December 7 elections.

According to the Krontihene, who sat in state due to the absence of the Omanhene, Odeneho Brentum IV, the people of Dadieso, and indeed Ghanaians, have “heard so many promises from others. The bearers of some of these promises have turned out not be trustworthy anymore. However, we know this promise of ‘1-District-1-Factory’, is not a lie.”

He, therefore, appealed to the NPP flagbearer “not forget to set up one of these factories in Suaman. This will create jobs for the masses of unemployed youth in Suaman. I have every confidence in you that this promise will be fulfilled.”

Nana Armah Kofi III made these remarks when Nana Akufo-Addo, in the company of the NPP’s parliamentary candidate for Suaman, Christian Baah, and a host of national and regional party stalwarts, paid a courtesy call on him at his palace, on Friday, August 12, 2016.

Thanking the NPP flagbearer for consistently making it a point to visit Dadieso, the Krontihene stated that this act by the NPP flagbearer “has shown us that he has true love for us. It is our prayer that God will bless his endeavour this election year.”

He urged the NPP flagbearer to continuously trumpet his Free SHS policy, stressing that “1-District-1-Factory, and Free SHS should be the message to the electorate across the length and breadth of the country.”

Nana Armah Kofi III requested that Nana Akufo-Addo, when elected President, upgrades the healthcare centre at Suaman into a District Hospital, assuring the NPP flagbearer that “when you do this for us, we will vote for you over and over and over again”, much to the delight of the hundreds gathered at the Omanhene’s Palace.

“Your achievements as Attorney General and Minister for Justice, and subsequently Minister for Foreign Affairs are well-documented. In the field of law, you will surely be amongst the best top 2 lawyers ever in Ghana’s history. If you have achieved all of these when you have not been President, then Ghanaians should expect even greater achievements for this country when you are elected President,” he said.

In concluding, the Dadieso Krontihene urged the youth and activists of the various political parties to be tolerant of each other’s views, and campaign without the use of intemperate or abusive language. He indicated that there’s no need for violence in this year’s elections, happy that supporters of the NPP have not engaged themselves in any violent acts.