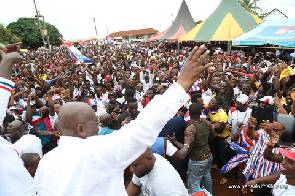 National Youth Organiser of the New Patriotic Party, Sammy Awuku, says Ghanaian youth have been worse off than ever before in the history of the country under the John Mahama-led government.

Speaking to Onua 95.1FM, he described President Mahama as “the biggest disappointment of a president who has led the country since 1956…In total, Ghanaian youth have been worse off”.

He said the 2016 election manifesto that will be unveiled today by the NPP would be the blueprint to get the country out of the current economic challenges, which has created unemployment, particularly among the youth.

Christened:“Agenda for Change: Jobs, Prosperity and Security the Peace”, the party is convinced the policies and programmes covering all sectors of the economy have what it takes to drive Ghana’s economic growth and offer a secured future for the people.

Party executives say featured prominently in the manifesto is job creation. Ahead of the launch, Mr Awuku told Onua FM reporters at the Accra Trade Fair Centre Sunday that “what the people of Ghana are looking out for is hope” which he said, a Nana Akufo-Addo-led government will offer.
 
“Nana Akufo-Addo and Dr Bawumia and the team NPP can offer Ghana with real and practical solution that will secure the nation,” he said.

The youth organiser lashed out at the youth within the John Mahama-led government, saying they have failed to live up to expectation by lifting the country’s youth “to stand on their feet”.

He said it was unfortunate that some of these youth were at the heart of the rot that was uncovered at some State agencies such as GYEEDA, SADA, while some were at the forefront of the payment of judgement debts.

Today’s event, which is set to kick-start in few minutes, will see the NPP’s vice presidential nominee, Dr Mahamudu Bawumia, giving an overview of the manifesto.

Key party officials will also take turns to touch on the various thematic areas of the manifesto. Nana Akufo-Addo will crown the event with the keynote address.