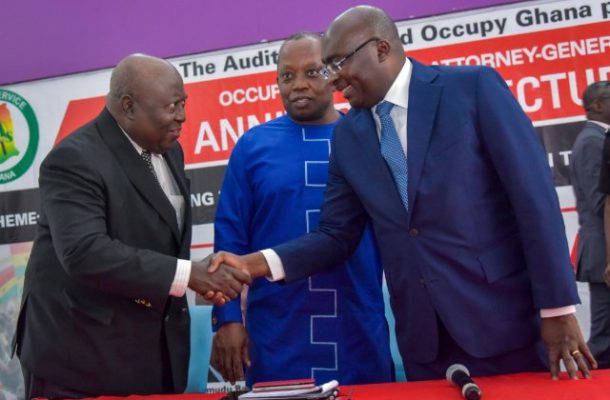 Vice President Dr Mahamudu Bawumia, has described the policies and programmes being implemented by the Akufo-Addo administration to fight the canker of corruption as unmatched in Ghana’s Fourth Republic.

According to Vice President Bawumia, the administration of President Akufo-Addo has, in just two and half years of being in office, introduced systems and institutions designed to reduce human interface in service delivery, while significantly increasing the resources available to anti-corruption agencies in an all-out effort to cut out waste and eliminate opportunities for corrupt practices.

Vice President Bawumia touted government’s success story in the fight against corruption when he gave the keynote address at the first OccupyGhana Vrs Attorney General Anniversary Lectures in Accra on Friday, June 14, 2019.

“The government of Nana Addo Dankwa Akufo-Addo is putting in place the systems and institutions that will help us going forward. The online systems we are putting in place have virtually eliminated corruption at DVLA, Passport office and business registration at the Registrar-General’s Department. We have reduced corruption at the ports through the paperless reforms. The Auditor General has so far disallowed some Gh¢5billion of government expenditure; we have passed the Right to Information Act, Public Procurement is now more transparent with the e-procurement system that has been implemented by the PPA. The e-justice programme has also been launched to automate the court processes.

"When the land digitization process is complete we will also virtually eliminate corruption at the Lands Commission.

“As you may be aware, at least 21 former public officials are currently on trial for alleged corruption-related offences.

“We have passed the necessary legislation and appointed a Special Prosecutor to deal with exceptional cases of corruption.

“As the heads of the Audit Service, CHRAJ and other anti-corruption agencies can attest, we have provided significantly more resources in the last two years or so than used to be the case. The Auditor General just disclosed that the Service is getting threefold, the resources it used to get, now.

Vice President Bawumia emphasised, however, that the fight against corruption is not over, and government will continue to take the necessary measures, implement the necessary reforms and collaborate with the appropriate agencies to deal with corruption head-on.

“As a government, we remain committed to making corruption unattractive on a sustainable basis. This calls for collaboration and strengthening of institutions mandated by the Constitution and other laws of the country to protect the public purse. We are doing more beyond the use of technology to build systems and institutions in the fight against corruption.”

Vice President Bawumia continued, “The fight against corruption remains our work in progress. We believe that our best instruments are through the development and strengthening of institutions and systems to improve transparency, accountability and timeliness in the accountability in the use of public resources.”

The Vice President urged all stakeholders to join Government in the fight against corruption, pointing out that the negative effects of corruption affect all, irrespective of status or position.

“We believe that the success of our fight against corruption depends on the collaboration among all institutions – public and private - and citizens. Without the work of concerned individuals called OccupyGhana, working as an NGO, reportedly with very little support from anyone but themselves, we would not be here today to celebrate the development in the evolution of the law and the fight against corruption.

“We applaud all those bold citizens who will stand up against the corrupt and the embezzlers of public funds. May we all continue in this most critical work of protecting our commonwealth and ensure that we can use and share our resources efficiently and fairly to the benefit of all,” he added.