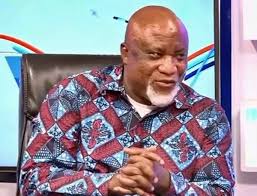 A key figure in the campaign team of Alan Kyeremateng's 2024 NPP Flagbearer bid, Hopeson Adorye has launched a scathing ridicule of Northerners in the governing NPP.

Addressing a crowd which participated in a walk christened "walk for Alan" in Kumasi on Sunday, Hopeson Adorye stunned his audience when he claimed that Northerners, who represent the Dombo tradition of the NPP, are always fit to be running mates of the party.

In a denigrating manner, Hopeson, who has been seen in recent times moving quiet closely with Trade Minister Alan Kyeremateng, said the NPP has three traditions: Dankwa, Busia and Dombo, adding that the leadership of the party has always been between the Dankwa and Busia tradition, with the Dombos, from the North playing second fiddle as running mates, and called for that tradition to remain unchanged for the 2024 elections.

"In 1992, Albert Adu Boahen, who represented Dankwa contested with a Dombo. In 1996, we had the Great Alliance bit in 2000, it came to Kufuor, who is a Busia, and he runned with a Dombo (as his running mate). Then after Kufuor, it moved back to Dankwa, with President Akufo-Addo. He also contested the election with another Dombo (as his running mate), who is Vice President Mahamudu Bawumia.
If it went to Dankwa, came to Busia, went back to Dankwa, where should it go now, is it not Busia?" Hopeson Adorye asked.