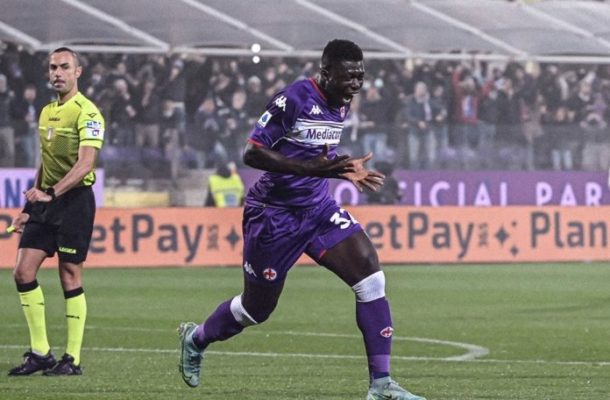 Ghanaian midfielder Alfrred Duncan scored his first goal of the season as he also provided an assist for Fiorentina in their 4-3 win over AC Milan on Saturday evening.

Alfred Duncan tapped in an opener and Riccardo Saponara curled in a superb second from distance before half-time and also set up Dusan Vlahovic's second goal and Fiorentina's third goal.

Vlahovic grabbed his first on the hour, rounding Ciprian Tatarusanu to finish, and scored Fiorentina's fourth late on.

The highly-rated 21-year-old fired in from 20 yards to put the game beyond Milan, despite Lorenzo Venuti's 96th-minute own goal.

It was Serbia forward Vlahovic's 27th Serie A goal in 2021, the most in a calendar year for any Fiorentina player in the league since 1960.

Ibrahimovic, meanwhile, becomes the oldest player to score at least two goals in a Serie A game and the first 40-year-old player to net a double in Europe's big-five leagues in the 2000s.

Milan sit second, level on points with Napoli having played a game more, while Fiorentina climb to sixth.

The Ghanaian midfielder made 11 appearances for Fiorentina this season.