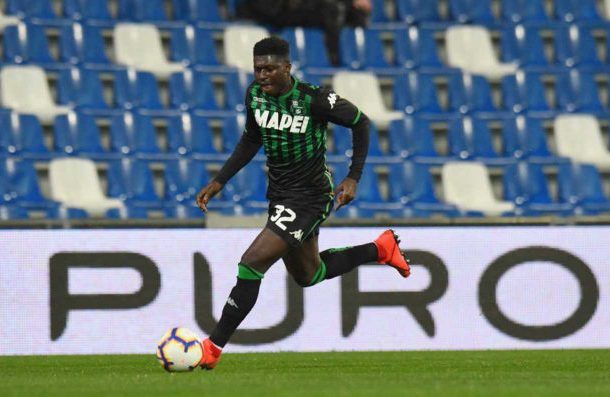 Ghanaian Midfielder Alfred Duncan could land at AC Milan following a move by the Italian giant sign the Sassuolo star.

Milan are said to be considering a swap with their defender  Frank Kessie.

According report by Italian website Pedullà, the former European champions stand are in pole position to snatch Duncan but much will depend on an intended swap with  their Ivorian defender Frank Kessie.

The move by Milan comes as a cross to Fiorentina, had written to Sassuolo and were in waiting for the reopening of the January transfer window.

"Milan, have kept an eye on Alfred Duncan," the report said.

"The pedulla player has an offer from Fiorentina but is waiting foor the Devil. It all depends on Frank Kessie."

Alfred Duncan expects Milan , but everything will depend on Frank Kessie Milan.

Because if the positions of Milan's Krzysztof Piatek and Suso would seem rather defined, the situation of the former Atalanta defender will be different.

In fact, as Alfredo Pedullà reports through the CorSport columns, the club has not yet completely dissolved its reservations regarding the Ivorian midfielder.

Milan between Kessie and Duncan: the situation
It is theoretically among the few players who could secure a treasure for the club, but at the same time the management would not have really decided on what to do. Owner in Cagliari, the company would certainly have expected more from him in Sardinia and in general so far. But not to the point of liquidating it immediately and planning a sale without thinking about it.

So after having touched Wolverhampton in the summer, there is now Inter in the background for the 23 year old from Ouragahio. The player likes the Nerazzurri who evaluate him as an alternative to Arturo Vidal and continues to tease some English clubs. The footballer, for his part, seems not to have foreseen a departure, at least not until June even if the situation is still in progress.

In fact, Milan really likes Duncan del Sassuolo and already since last July when concrete steps were taken in this direction. In the end the Emilian club decided to sacrifice Stefano Sensi and to keep the 26-year-old Ghanaian, promising to satisfy him in the next session. Or this.

And now here is the great opportunity. The player is followed by Fiorentina where he would like to go, but first - ensures Pedullà - he wants to understand what Milan will decide to do.

Should Kessie really come out, he could therefore land the median on display at the Mapei Stadium in the last 3 and a half years.