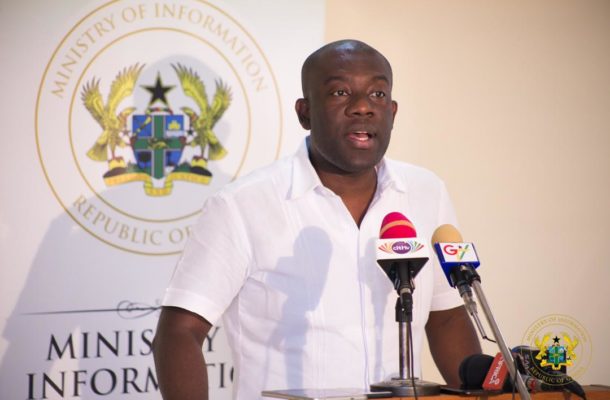 Information Minister, Kojo Oppong Nkrumah has reiterated that all backlogs of COVID-19 samples have been cleared from the various testing labs in the country.

According to him, the staggering numbers that were recorded from an outbreak of the virus in a factory at Tema was part of the backlogs that shot the country’s case count to over 4000.

The significant jump of 900 cases on Friday sparked concerns over the credibility of the data being provided by the Ghana Health Service especially after they said the country had already reached its peak of infections.

Speaking to Francis Abban on the Morning Starr Monday, Mr. Oppong Nkrumah said: “the backlog of samples in the labs have all been cleared and now we are working towards the point where everything that comes in will be cleared immediately”.

He also noted the employment ministry is following up with the affected factory in Tema to ensure that further spread of the virus is not continued.

Meanwhile, President Nana Addo Dankwa Akufo-Addo has extended the ban on public gathering in the country as confirmed cases of Coronavirus in Ghana rise to 4,700.

The President in a Sunday night address warned people who violate the directive will be dealt with in accordance with the law.

“Tonight I have come to your homes to announce that the ban on public gathering has been extended to the end of the month ie 31st of May,” he said.

The extension comes in the wake of reports that religious leaders were persuading the President to lift the ban on public gathering.

The President also reiterated the order for the closure of all borders to the country as means of containing the spread of the virus in the country.

Starr News understands majority of the cases were recorded at Obuasi which has a total of 261 positive cases.

Similarly, the Western region has recorded 14 new cases of COVID-19 raising the regional figure from 38 to 52 as of Sunday.