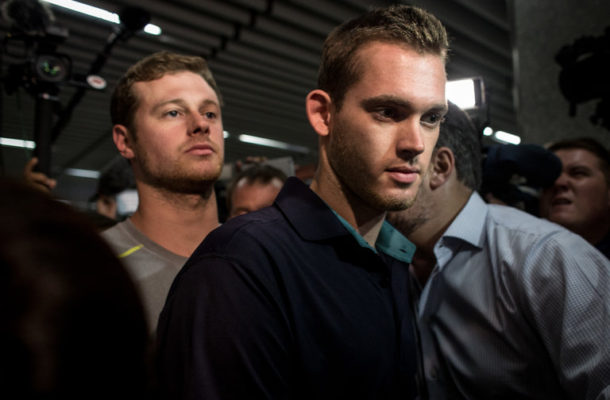 Two American swimmers were pulled off their flight to the United States by the Brazilian authorities and detained for several hours on Wednesday night, Olympic officials said. It was the latest indication that the police were skeptical of the swimmers’ claims that they had been held up at gunpoint during the Rio Games.

“We can confirm that Jack Conger and Gunnar Bentz were removed from their flight to the United States by Brazilian authorities,” a spokesman for the United States Olympic Committee said. “We are gathering further information.”

The men were released after agreeing to remain in the country and to speak with investigators about the episode on Thursday, according to officials with the United States Olympic team.

In a case that has made headlines around the world, the gold medalist Ryan Lochte said that after leaving a party early Sunday, he, Mr. Conger, Mr. Bentz and one other American swimmer were robbed by men claiming to be police officers.

The idea that such prominent athletes could be robbed by officers during the Olympics was a huge embarrassment for Brazil, underscoring longstanding concerns about holding the Games in a crime-plagued city like Rio de Janeiro.

But questions about the Americans’ testimony to the police turned that embarrassment into anger, with many Brazilians wondering whether the athletes had lied about the episode and smeared their country’s reputation.

In a conversation on Wednesday with NBC’s Matt Lauer, Mr. Lochte — who has already returned to the United States — changed certain details of his account. After previously saying that an assailant had put a gun against his forehead, he said that the gun had been aimed in his “general direction.”

Mr. Lochte had also previously said that the swimmers had been robbed after the men identifying themselves as police officers pulled over their taxi. On Wednesday, however, he told NBC that the taxi had stopped at a gas station so they could use the bathroom.

Mr. Lochte went on to say that the swimmers had been robbed upon returning to the taxi. He ascribed the inconsistencies to “traumatic mischaracterization” caused by stress. Mr. Lochte emphasized to Mr. Lauer that he considered himself as a victim.

The episode has created a significant test for the newly collaborative relationship between American and Brazilian law enforcement officials. In the months leading up to the Olympics, the countries worked closely as they tried to improve Brazil’s ability to thwart a terrorist attack. But on Wednesday night, American officials seemed to be in the dark over the detention of Mr. Conger and Mr. Bentz.

Hours after the swimmers were removed from the plane, it was unclear where they were being held. When asked if United States Olympic officials knew where the American swimmers were, the U.S.O.C. spokesman, Patrick Sandusky, said, “At this point we are gathering details and have no further comment.”