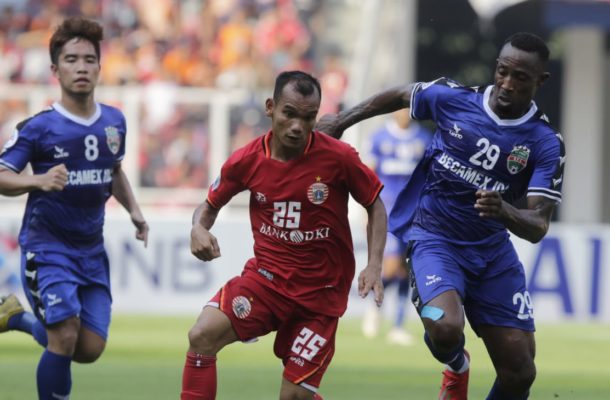 Jakarta: Persija Jakarta and Becamex Binh Duong played out a 0-0 stalemate at Gelora Bung Karno Stadium on Matchday One of the 2019 AFC Cup on Tuesday.


The Indonesian champions failed to make the most of home advantage in the Group G encounter and the Vietnamese side will certainly be satisfied with a point from a tricky away fixture.

The home side dominated possession but rarely troubled Bui Tan Truong in the Becamex goal. Persija might have looked in control at the break, with a 74 percent share of the possession in the first 45 minutes, but they had made no clear-cut chances, leaving their opponents fairly comfortable.

As the graphic below suggests, Becamex came into the game more in the second half and the chances eventually arrived, particularly in the final 20 minutes.

Persija still managed to have a 65 percent share of the possession over the 90 minutes but Tan Truong made just two saves in the whole match.

To go further into the tournament, Persija will certainly have to sharpen up in the final third and find a cutting edge.

Despite Persija’s failure to get off to a winning start, there were encouraging signs from playmaker Bruno Matos, who was at the heart of his side’s best moments. He showed silky skills early on as he left several Becamex players for dead with a change of pace and dip of the shoulder.

Matos also showed a willingness to shoot from distance and hit a couple of decent efforts that were just lacking in accuracy.

The Brazilian's passing matrix (above) suggests he had to go sideways too often, which highlighted a lack of movement ahead of him and on the wings but he still made two key passes (in yellow), one of which almost resulted in substitute Novri Setiawan giving Persija a late goal.

The Indonesian side may still be lacking in match sharpness but Matos could well be the player they need to unlock defences in the matches to come.

Becamex made better use of their attacking forays than their opponents as, despite having significantly less possession, they created more and better opportunities. Nevertheless, it is clear that both sides could do with a little more shooting practice on the training ground.

Of a combined total of 27 shots, just five were on target. The shooting accuracy for Persija was at only 17 percent, with Becamex marginally better at 20 percent.

The shooting matrix (above) shows how the teams mustered a reasonable number of efforts on goal but were rarely able to force the goalkeepers into a save.

It is still early days in the season for both clubs but it is evident that they need to find their range to provide a stronger threat to their opponents.