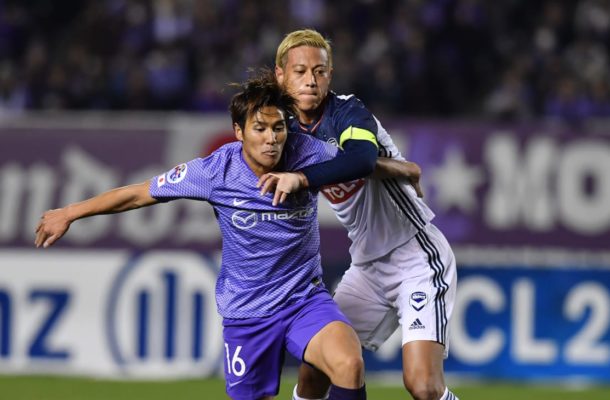 Hiroshima: Japanese superstar Keisuke Honda was unable to inspire his Melbourne Victory team to victory as a late Daiki Watari header sealed all three points for Sanfrecce Hiroshima in a 2-1 victory in Group F of the AFC Champions League on Tuesday.


Honda returned to play a club game in Japan for the first time since 2007, but the Osaka-born attacking midfielder was overshadowed at Hiroshima Athletic Stadium by a disciplined performance from last season’s J.League runners-up.

After taking an early lead through Shunki Higashi, the home side were prepared to sit deep and defend, absorbing the pressure from Melbourne Victory before looking to strike on the counter.

As the average positions graph (below) shows, almost all the Sanfrecce team (yellow) were camped in their own half throughout the 90 minutes, while it was the reverse for Melbourne (blue), with the majority of their side taking up positions in their attacking half.

Despite this, Sanfrecce were able to hold out and limit Melbourne to just three shots on target.

Further illustrating this point are the defensive statistics that show just how much work the Sanfrecce defence completed over the 90 minutes.

Between them they made 12 tackles, with 75 percent success, and importantly made 27 clearances as they repelled attack after attack from the visiting side.

Melbourne learnt a harsh lesson in taking their chances, with the home side far more effective and efficient when going forward.

Despite having almost two-thirds of the possession, the visitors only managed three shots on target compared to Sanfrecce’s six (as shown in the image below) and despite having 21 crosses, their accuracy was only 14.3 percent.

Compare this to the home side, who only managed 10 crosses but had a 40 percent accuracy. More crucially, both of their goals came courtesy of crosses.

Had Melbourne been able to make better use of their possession, the result of the match may have been very different.