Anas Named and Shamed? 13 Talking Points arising from "Who Watches The Watchman" 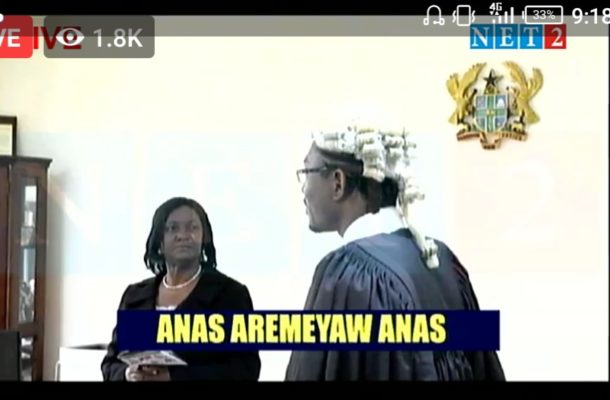 In the Salis Newspaper's documentary, Anas was described to have met culprits of a gold scam which he was investigating to drop the case after he was paid off. This was also to substantiate claims by the C.E.O of Hafred Security Company Ltd, Hafeez Abdullah that he had paid $50,000 just so this case was dropped.

Omega Strategic Services (foreign company) contracted Almont to supply them gold and later contracted Halfred to provide security was the gold was supplied and onward transportation. Omega received neither gold or money and contracted Anas to investigate the matter in 2009.

In the video screened, Anas allegedly met with Mubarak Seidu, C.E.O of Almont Company Ltd and his accomplice Baba Tunde. After a lengthy discussion an escape route was found with the journalist agreeing to helping them out of the maze and implicating Hafeez for being stubborn and arrogant towards him. He fell on Baba Tunde who led him to meet Mubarak. Later interaction with the State Prosecutor was also highlighted.

In as much as we have all grown to cherish our own, here are some talking points from the video worth paying attention to; 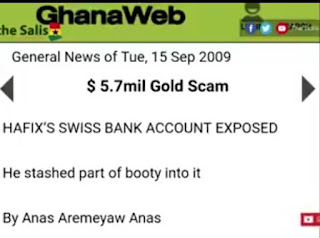 How Much Was Involved in the Gold Scam?

Per the video Anas told Baba that the amount involved was $1.9m. Baba who had received just ¢6,000 from Mubarak was shocked to know that. Was he also being duped? This is also contrary to the journalist's publication in the New Crusading Guide. On 15 September, 2009, he published that Hafiz's Swiss bank has been exposed in linkage to a $5.7m gold scam.

"..so Anas told me that the business which brought about this case was worth $1.9m...." Baba said  when he was introducing Anas to Mubarak.

Mubarak confirmed he knew Anas' boss when Anas suggested how big he Anas was inspite of his slim body.

"Oh I know you. And if you like ask your boss, he knows me very well. I was the one defending them anytime they brought them to the barracks " said Mubarak.

We all know of how Kwaku Baako spent time at the barracks because of his journalism then.

Who is Prince Kingston Kwame?

Prince, another suspect who was mentioned was in Cotonou according to Mubarak after Anas told them the police had tasked him to locate all the accomplices. Mubarak told Anas

"If you ask Baba, he will tell you the business is from Cotonou.The guy who brought the business was from Cotonou, he is called Abass but his business name is Kwame." He later added that Hafeez transferred $400,000 to Kwame.

Did the late President Mills know about the matter?

Anas is on record to have said that the President of Ghana then,  Prof. Mills had heard of the issue and was even angry at the culprits. On Mills being angry he said, "Mills is angry Mills says Ghana? Who?  The journalist also had this to say  to Mubarak as he pleaded for Hafeez to be pardoned too,"I can't do anything. At this stage? What can I do for him? The president of the country? What do I tell him?

People at the Airport were sorted out?

Well, I don't see how that was done but clearly Mubarak knows. He confessed to the ace journalist that "that amount was not for us alone, we had to sort other people out including the people at the airport." He subsequently added that $45,000 was spent at the Airport.

After Anas explaining to them that he was only called upon in times of difficulty, Baba Tunde added that anything Anas tells the police is what they are going to take because he doesn't lie. Baba,"and whatever he tells them, they are going to take because they know he doesn't lie ".  Anas then urged Mubarak to do this, "basically what will be needed from you is to put in a statement but not now"

Anas, "First of all, you have to clear yourself with the police and have to tell them a story that will be credible... I will write stories to the high up". He later added that, "I have to go and sit and think. I am very tired. Get yourself ready.... you should be meeting the police with a nice story... Relax we need to use our heads now."

The police took some of the booty?

Upon meeting with the State Prosecutor, Anas made this narrative, "Hafeez probably went back, convinced Mubarak that, what's your problem?  It's $1.9m, I have shared it to the police and some other people so the case won't go anywhere." He later added that, "...because I went with the police, I then, then eh Adu Poku was the CID boss so I met him and I gave him $75,000.

The way he blew the money! Girls! Miss Malaika people.....  Anas on how Hafeez spent his money

From the statement below clearly there was a transfer to the aboves account. He had this to say to the state prosecutor about Mubarak.

Anas, "he said he has been very foolish in the matter was by telling Hafeez to transfer his portion of the money to Egbert's account as part of his booty"

Mubarak confirmed in the documentary that he had received two transfers in the form of $75,000 and $195,000 from Hafeez and not the $500,000 Anas said. Which of the two transfers went to Egbert's account?

After Anas told her that some $5,000 was her share per the documentary, the State Prosecutor had this to say, "we all want money,  we all need money. That's the reason why I had to know the evidence you have and then we tune it in to suit the presentation we have to do in court ". She had earlier acknowledged Hafeez for being so bus settling everyone.

Was the Prosecutor afraid of Mubarak?

Upon showing his interactions with the accomplices to the State Prosecutor,  the journalist also had this to say, "they buy me with $100,000 because he somehow relates to me.....no it was Babatunde, he now wanted to fight for himself." Clearly, this doesn't include Hafeez's claims of paying the $50,000. So in all,  how much did he make?

How did the case end?

On 2nd June, 2018, Anas' boss,  Kwaku Baako admitted that the gold scam case went to court but due to some things it became "basaa" Well the Judge, Charles Quist dismissed the issue for want of prosecution. Could it have been possible regarding the confessions the accomplices made?  Did the money influence the proceedings?