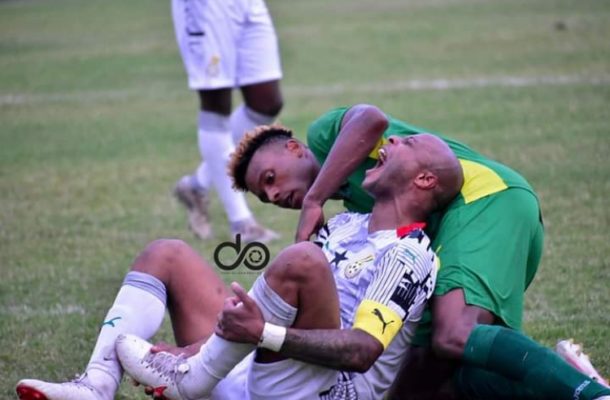 Black Stars captain Andre Ayew has allayed the fears of Swansea City after he suffered a hard tackle in the last action of Ghana's AFCON qualifier match against Sao Tome and Principe last Sunday.

Kwasi Okyere Wreidt was sent clean through on goal in the last second of the game but could only shoot straight at the Sao Tome goalie before Andre Ayew pounced on the rebound but there was a tackle flying in from a Sao Tome defender.

After the final whistle in a match which Ghana won 3-1 , Ayew spent lengthy time on the playing field receiving treatment.

The Ghana captain played the entire duration of the game which Ghana easily won to top Group C.

After the tackle the Ghana captain had to be helped as he hobbled off the pitch with a strapped left leg but has dismissed fears it's a serious injury as was initially feared.

Speaking after the Black Stars triumph the Swansea an says it was only a knock and nothing serious.

“It’s a knock. The club medical team have seen it, I can put my leg on the floor. There won’t be any issue.” Ayew said after the game.

Ayew has been integral for Steve Cooper's side this season, scoring 14 goals in 36 appearances.

The Swans return to action against Birmingham City on Friday night.