Andre Ayew recounts how banana was thrown at him in Russia 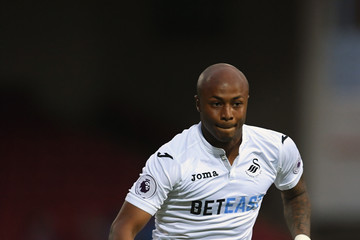 Black Stars captain Andre Ayew has been speaking about racism in football and how anti- racism pressure group Black Lives Matter can achieve equality and drive away structural racism.

The group which was sparked into action by the killing of Black man George Floyd in Minneapolis, Minnesota sparked a lot of anti racist campaigns across the USA and the world over.

In recent times the group has come under the microscope with the Premier League deciding against using it on sleeves of jerseys due to their political undertones creeping in.

The Swansea vice captain has been sharing his chilling experience with racism in Russia when he played for French Ligue 1 side Olympique Marseille.

He said he was racially abused in an Europa League game against Zenith St. Petersburg in Russia.

"If you look back to the years before my dad's time, it was even worse than now. These players like my dad paved the way for everyone to come in and prove that black people can do the job in Europe," the 30-year-old said.

"I remember playing in Russia in the Europa League versus [Zenit] St. Petersburg, getting bananas thrown everywhere.

"People have gone through worse, I'm talking about my personal experience, but I've seen friends going through things and I just feel like that's not how it should be.

"We need to make sure that we stamp our foot on the floor and make sure that it changes. Nothing's easy but we need to keep going and not give up in what we believe in. I think that can take the world to another level." he said