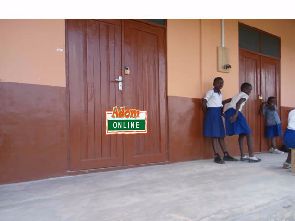 An EP basic school at Juapong in the North Tongu District of the Volta Region has been locked for the past three weeks as a result of government’s inability to pay the contractor in charge for work done.

The situation has left pupils with no option than to study under trees.

Some of the students who spoke to Adom News said all the classrooms have been locked because the contractor claims he has not received the full payment from government.

Until he is paid, there is no way the students will be allowed anywhere near the premises of the school to study.

The six-unit classroom block was meant to replace a clay building which was partitioned into classrooms to be utilized by the students.

The students said the bad nature of the road leading to the school has created an avenue for the management of the school to collect GHC 5.00 from them as a maintenance fee.

The worst of all the situations, they said is the crossing of a river before getting to school, a situation which causes some of them to stay home anytime it rains.