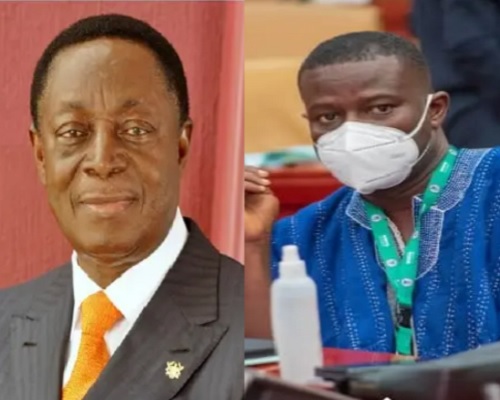 Majority Chief Whip and Member of Parliament (MP) for Nsawam-Adoagyiri, Hon. Frank Annoh-Dompreh has slammed a former Finance Minister, Dr. Kwabena Duffour, who believes that the borrowing under the Akufo-Addo-led government is unprecedented.

In a tweet to respond to comments made by the NDC leading member about how much the current government has borrowed since assuming office, Annoh-Dompreh said the opposition party has no better record in the economic management of this country, hence Dr. Duffour would have elevated Ghanaians to unmatched hardships if the COVID-19 pandemic came during his tenure.

“Dr. With lots of Respect to you. Based on your Track Record as a Party& Govt. Covid 19 under the watch of your outfit would have been 'Hell' on Earth,” he said.

Hon. Annoh-Dompreh further criticized Dr. Duffour on his 'policy credibility', wondering why the latter took Ghana to the International Monetary Fund (IMF) when there was no pandemic or global economic crisis.

Dr. Kwabena Duffour has urged the governing NPP must be humble enough to admit that the country is currently facing a perilous debt situation.

Reacting to claims made by the Majority Leader, Osei Kyei-Mensah-Bonsu, suggesting that the NPP’s borrowing was better than the NDC’s, Dr. Duffour pointed out that the NPP government has borrowed more in the six years than the erstwhile NDC administration did in eight years.

He further stated, “Does the Majority Leader of Ghana’s Parliament not know these facts, and is this what supports his claim that the NPP has a better borrowing record than the NDC? Or is the Majority Leader peddling falsehoods in order to play politics during what can be considered one of the most dire times in our nation’s history? Whatever the reasoning behind the majority leader’s statements, the facts show that they are false and should be corrected as publicly as they were stated.”

Dr. Duffour, therefore, urged the NPP to be humble and admit that “things have not gone to plan over the last 5–6 years of the NPP Government and the country is in a more perilous debt situation today than at any time between 2009–2016,” adding that “Such an admission would hopefully then establish a basis to rally all Ghanaians towards finding lasting solutions.”

Dr. With lots of Respect to you. Based on your Track Record as a Party& Govt.Covid 19 under the watch of your outfit would have been 'Hell' on Earth.

Without Covid-19 & global Economic stress, you still sought solace with the IMF shamelessly...