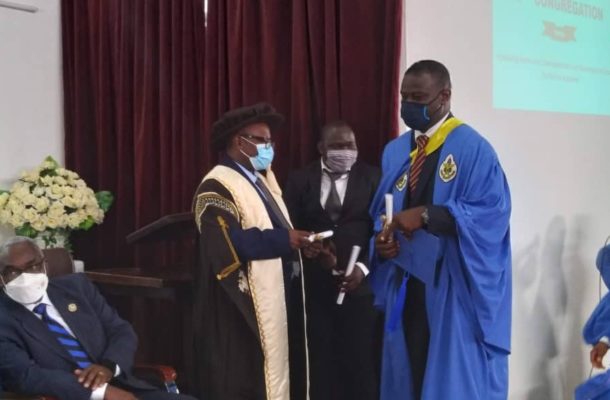 MP for Nsawam-Adoagyiri Constituency in the Eastern Region has graduated from the Institute of Local Government Studies [ILGS] with a Masters Degree in MSC Environmental Science, Policy and Management.

He graduated with 144 others and was awarded as the best student.

Addressing the 5th Congregation, Annor Dompreh said he found the motivation to enrol in the Environmental Science, Policy and Management Programme, recognizing its potential to provide knowledge and research skills anyone will require as the foundation for solving environmental issues in Ghana.

He urged his fellow graduands to make use of the knowledge gained in the studies by executing it in different parts of the country so they can propose and bring the improvement of people's lives in their communities.

Annor Dompreh, however, called on the National Development Planning Commission to decentralized the renewable energy development policy so that the students will continue to channel out relevant research in those areas.

The Minister of Local Government and Rural Development, Hajia Alima Mahama in a speech read on her behalf announced that the Government is constructing a new hostel complex for students in Accra.

She said the procurement processes have completed and are expected to be ready within 12 months and with funding from the District Assemblies’ Common Fund.

According to her, the works would entail the construction of a 120-bed accommodation facility, a 600-seater conference auditorium with ancillary spaces as well as a gym.

"It will be the biggest addition to the Institute’s physical infrastructure since its establishment. Also in fulffulfilmentthe 2016 NPP Manifesto promise, the Tamale Campus would receive a facelift of existing facilities as well as the construction of a modern conference and hostel complex. These facilities when completed would ensure a congenial environment for learning at both the Accra and Tamale campuses of the Institute" she said.

However, he said there has been a lot of improvement under his tenure which has given the raise the image of the Institution to a higher standard.

He expressed gratitude to the Government for honouring a promise to improve the infrastructure facilities in the Accra and Tamale campuses of the Institute.