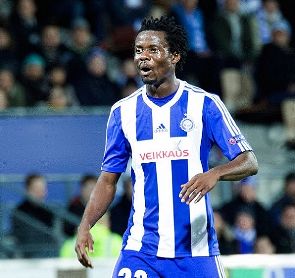 Former Ghana midfielder Anthony Annan is reported to be closing on a move to Israeli top-flight side Beitar Jerusalem.

Annan, 32, became a free agent after ending his three-year stay with Finnish champions HJK Helsinki at the end of last term.

The former Hearts of Oak ace was linked with several clubs in Sweden and Finland during the winter transfer window but a deal could not materialized.

However, reports indicate that the diminutive enforcer will undergo a mandatory medical at Israeli side Beitar Jerusalem on Tuesday before putting pen to paper on a short term deal.

Annan is expected to use his experience to help Nir Klinger's side achieve their European football competition target should he pen a deal.

The midfielder was part of the squad that qualified Ghana to its maiden appearance at the 2006 World Cup in Germany.