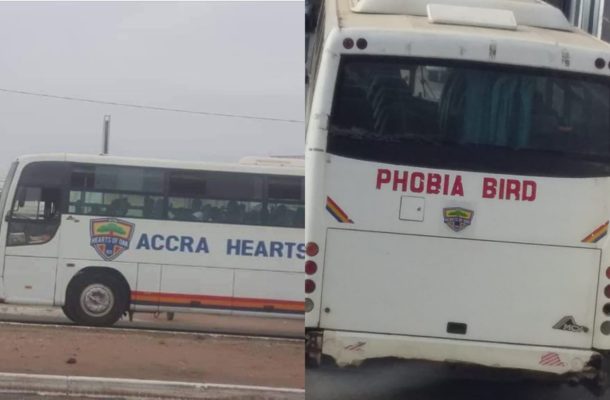 Former board secretary of Accra Hearts of Oak, Mr Enesrt Thompson has bemoaned the deplorable situation the club currently finds itself in.

According to the former SSNIT boss, he always feels like crying whenever he see the rickety bus popularly called the phobian bird which the club uses.

He says that bus was procured during their time and ordinarily the club should not be using it any longer.

The phobian bird has been a constant source of ridicule for thr club from rival fans due to its poor state.

“Everybody is waiting for Togbe to buy a bus for the team, if the club as a serious entity float shares, will get money and buy a bus.

“Even Pobeman project we need money to have it done and where is the money?

“Hearts of Oak has a weak financial base and that is what stops the team from going for good players, which is bad”

“Anytime, I see Hearts of Oak Bus I feel like crying because I was involved in purchasing that bus. Why should the club be using such a bus at this time?.

“Hearts shouldn’t have been using this bus by now and training on poor pitches”, the former Hearts of Oak board secretary shared.