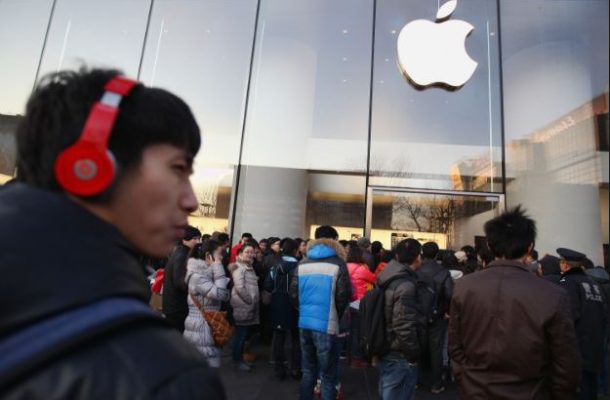 Apple is opening a 300 million yuan ($45 million) research and development center in Beijing, its first ever in China, as the U.S. technology giant looks to reverse declining sales in the country.

The announcement was made on social media by the Zhongguancun Science Park Administrative Committee, the landlords that run the site where Apple is opening its facility.

It is located in Beijing's version of Silicon Valley, the Zhongguancun Science Park.

"This is the first R&D Center that Apple has directly invested in China. In the future, this R&D center will be dedicated to researching and developing in the areas of computer hardware and software, telecommunications, video and audio equipment, consumer electronic products, information technology and other advanced technologies," Zhongguancun wrote on Weibo, the Chinese version of Twitter, on Thursday.

There will be 500 staff at the location.

Apple did not respond to a request for comment but instead pointed to a statement made in August in which the firm said it would be opening a new R&D center in China that gave no mention of a location.

The move comes as the iPhone maker looks to reverse falling sales and regulatory hurdles in China. It saw revenues in Greater China fall 33 percent year-on-year in its fiscal third quarter, and services such as the iBooks Store shut down earlier this year.

Apple chief executive Tim Cook has been on a charm offensive in China, visiting the country twice already this year and meeting with top government officials. Apple also invested $1 billion in Chinese ride-hailing service Didi Chuxing in a move it hoped would help it understand the Chinese market better.

Analysts said the new R&D center will help it get closer to the Chinese consumer, and could create synergies with Didi as it looks to new areas like cars.

"International firms must look at China differently. It is not just a market to sell products. They need to put in a lot of research on China consumer behavior because it's going to set the trend for other developing markets. It will be great to get a lot of consumer data in China and put it in to global product planning," Nicole Peng, analyst at Canalys, told CNBC by phone.

"It makes sense to have an R&D center that's close to all these tech companies in China for closer collaboration."